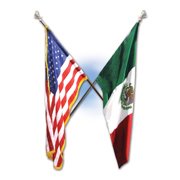 The Nogales International is the paper of record in Santa Cruz County, a county the size of Rhode Island on the U.S.-Mexico border with a population of around 47,000. The local culture and economy are closely tied to Mexico, and the International’s mission is to shine a spotlight on the community’s unique bicultural identity as well as the particular challenges it faces. The International has been publishing since 1925. Our content is exclusively local, meaning it is directly connected to Santa Cruz County or our twin city of Nogales, Sonora, Mexico.

This Report for America journalist covers Eastern Santa Cruz County in Southern Arizona with text stories, photos and video, focusing on agriculture, ranching and wineries. Environmental issues are at the forefront, due to the area’s biologically diverse mountain ranges and unspoiled grasslands. This area also includes a controversial mining operation that has split the community over the need for economic development vs. the project’s impact on the environment and rural way of life.