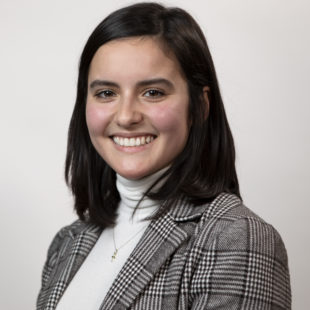 Allyson Ortegon is working for KUT in Austin, Texas where she covers growth and development in nearby Hays County. Before that, she covered politics and policy, including the 86th Texas Legislature, during fellowships with The Texas Tribune and with Texas NPR affiliate stations. She wrote for The Alcalde, the award-winning alumni magazine published by The University of Texas at Austin since 1913. In an earlier stint at KUT, Austin’s NPR Station, she participated in  NPR’s Next Generation Radio project. At UT, she reported across radio, television and print media for student publications including The Daily Texan and Texas Student Television. She will graduate with a degree in journalism and a secondary concentration in business. She is a two-time recipient of awards from The Headliner’s Foundation of Texas and she received the Jo Caldwell Meyer Scholarship from the Women Communicators of Austin, the Bob Schenkkan Endowed Presidential Scholarship, and the Carmage and Martha Ann Walls Foundation Endowed Presidential Scholarship in Journalism.

Beat: Hays County and the strains of rapid development

As Austin has grown in the few past decades, affordability in the city has become a bigger and bigger issue. The cost of housing has forced many working families to move further out from the urban core. This has meant explosive growth in many of Austin’s suburban communities. Everything from roads to water systems to schools and law enforcement in these communities have become strained. And that infrastructure stress means local governments are trying to catch up with the boom.