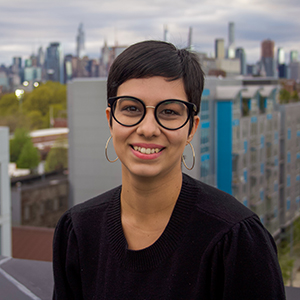 Amanda Pérez Pintado covers Illinois’ agriculture businesses and workers for The Midwest Center for Investigative Reporting, a nonprofit news site based in Champaign, Illinois. She previously reported on trending topics and local events in South Florida as an intern at the Spanish-language news outlet El Nuevo Herald. She holds a bachelor’s degree from the University of Puerto Rico’s Río Piedras campus and a master’s from New York University. While there, this multimedia reporter covered immigrant voters in the New Hampshire 2020 Democratic presidential primaries, the pandemic and Puerto Rico for Pavement Pieces, an NYU news site. Pérez Pintado was editor-in-chief of the student-run publication Latin America News Dispatch, which covers Latin America, the Caribbean and Latinos in the U.S., and in her native Puerto Rico she has reported for El Nuevo Día, the island’s main paper.

This reporter develops in-depth and data driven investigative and enterprise stories on agriculture businesses and workers primarily in Illinois. Half-a-million people work in America's dangerous slaughterhouses, with a majority based in rural areas. In addition, thousands of migrant workers travel to the Midwest each year to work in fields and factories. The focus of the coverage includes working conditions, living conditions and pay discrepancies.