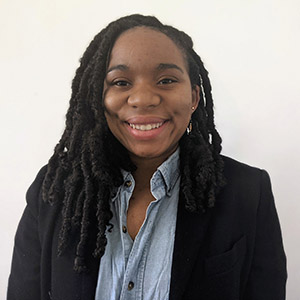 Ariama C. Long is a reporter for the New York Amsterdam News in New York City, covering local politics, city council and city agencies. A born-and-raised Brooklynite, Long was a Poynter-Koch Media and Journalism fellow and worked as a multimedia reporter at PoliticsNY in Brooklyn. Her beat went beyond politics and elections, and included coverage of the arts and culture. She has interned as an audio reporter at WNYC, a public radio station, and at the Brooklyn-based Heritage Radio Network, a nonprofit radio station that focuses on food. Her favorite thing about being a journalist is the risk it takes to be informed, curious and brave. Long holds a master’s degree in journalism from the City University of New York, and a bachelor’s from Chestnut Hill College, where she double-majored in English literature and communications.

This reporter covers local politics, the mayor, the city council and city agencies. This includes breaking news coverage as well as occasional long form and investigative reporting on those entities.