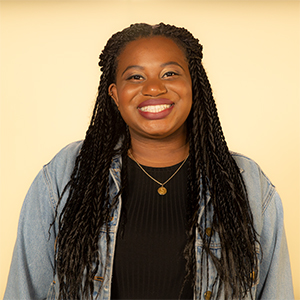 Astrid Kayembe is a reporter for The Commercial Appeal, a paper based on Memphis, Tennessee, covering South Memphis. Most recently, she was a social media associate for L.A. Taco, a news site, and participated in The New York Times Student Journalism Institute. Kayembe earned a bachelor’s degree in journalism with a minor in media and social change from the University of Southern California in 2021, where she was a reporter and editor for Intersections South L.A. Kayembe and a team partnered with L.A.Taco and won first place in a student innovation competition hosted by the University of Missouri School of Journalism. For a fellowship, she produced the “Truth Told” video series with a team of journalists as a part of the Google News Initiative. Kayembe calls South Central LA home, and when she isn’t reporting she can be found searching for the best fried plantains in the city (which are probably at her mom’s house).

Beat: The gap we're trying to fill is coverage of the African American community in the historic South Memphis, Whitehaven and Westwood neighborhoods of Memphis.

The Report for America corps member's beat encompasses the African American community in the historic South Memphis, Whitehaven and Westwood neighborhoods of Memphis. This area is home to the Soulsville area, where Stax Record was founded and a museum, music academy and charter school still reside there. It is also home to the only HBCU in our market, LeMoyne-Owen College, and the region's largest base of Black middle- and working-class residents, mostly in Whitehaven and Westwood.