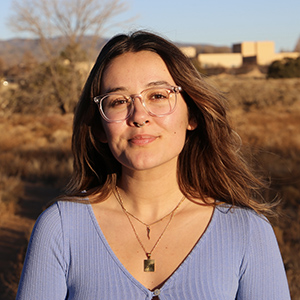 Bella Davis covers Indigenous affairs for New Mexico In Depth, a nonprofit, digital news outlet. She’s based in Albuquerque. Most recently, Davis reported on cannabis, housing, local government and more for the Santa Fe Reporter. She got her start in journalism at her college newspaper, which she joined at the beginning of the pandemic, and primarily covered protests spurred by the police murder of George Floyd. A graduate of the University of New Mexico with a degree in journalism, Davis was born in Eureka, California, grew up in central New Mexico, and is a Yurok tribal member.

New Mexico has one of the largest per capita populations of Native Americans in the country, many living in Bernalillo County. This beat focuses on New Mexico’s tribal communities and urban Native Americans and the challenges they face: poverty, hunger, poor education outcomes and negative health indicators. It also explores success stories and potential solutions.