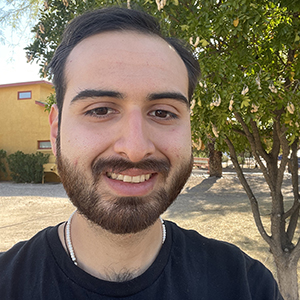 Bennito Kelty covers the IDEA beat, taking a close look at inclusivity, diversity, equity and access for the Tucson Sentinel, a nonprofit news site in Tucson, Arizona. Before this, he worked for the Yuma Sun in Yuma, Arizona reporting on the Arizona-Mexico border and county government. Kelty calls Aurora, Colorado home and its diverse immigrant community led him to become interested in understanding cultures from around the world that exist in America and how these groups of people live together. That interest, plus growing up in a Mexican American home, influenced his love of languages, including his own native Spanish and English. Kelty started reporting as a journalism student at the University of Missouri, where he won recognition from the Missouri Press Association for a story in the Missourian, the school’s community paper. Kelty has also won an award with The St. Louis American for breaking news coverage.

This reporter will report on the IDEA beat - watchdogging local government agencies, business and activist groups focusing on Inclusivity, Diversity, Equity and Access. Coverage will explore cross-topic stories about ethnicity, race and poverty and changing demographics to tell stories that would otherwise go untold.