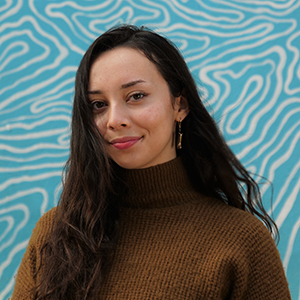 Carolina Cuellar reports on immigration and communities in the Rio Grande Valley for Texas Public Radio, which is based in San Antonio. Cuellar is a bilingual reporter who grew up in Stockton, California after she and her family emigrated from Colombia. A scientist-turned-journalist, she worked on the science desk at KQED, public TV and radio stations serving Northern California, and has written about dog DNA criminal forensics and the largest fire in Santa Cruz County history, the CZU Lightning Complex wildfire that started in August 2020. Her work has appeared in the Santa Cruz Sentinel, The Mercury News, and science sites such as Eos and Mongabay. Cuellar, a first-generation college graduate, holds a master’s degree in science communication and a bachelor’s in molecular, cellular and developmental biology from the University of California, Santa Cruz. She was a researcher in a virology lab and at a genomics company, with a focus on protein engineering, before pursuing a career in journalism.

Beat: Business issues in Laredo and other border areas

This reporter is based in Laredo and covers business border issues. Earlier this year, Laredo overtook the Port of Los Angeles as the nation's busiest trade hub. There are many stories to be told about our economy and how border and trade policy impacts people here and around the country. There are also issues that deserve more scrutiny, such as the movement of illicit drugs and human smuggling across the border.