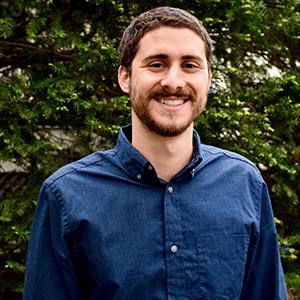 Daniel Ackerman covers Massachusetts’ South Coast, including the port cities of New Bedford and Fall River, for NPR affiliate WCAI in Woods Hole, Massachusetts. His audio coverage of science and the environment has aired on NPR, “Marketplace” and “99% Invisible,” while his writing has appeared in Scientific American, National Geographic and The Washington Post.  Ackerman holds a Ph.D. in climate change ecology from the University of Minnesota. He has reported from the bottom of a sinkhole and interviewed former presidential candidates (though not at the same time).

This reporter covers the South Coast, a dynamic region that includes the cities of New Bedford and Fall River. The region is known in part for its fishing heritage and top-dollar commercial port, its vibrant history of immigration, its entrepreneurial energy, and its position at the forefront of the nation's push to develop offshore wind power. The new reporter will focus across the South Coast to highlight diverse voices, with a beat to include education, local economy, racial justice and community culture.