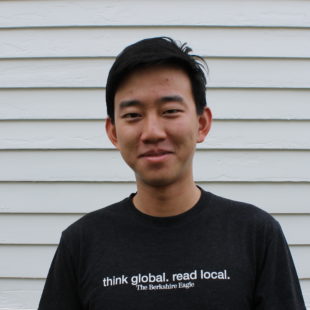 Danny Jin writes for the Berkshire Eagle, where he covers the Massachusetts Legislature and government for readers in the western part of the state. This coverage has, until now, been sorely lacking: Berkshire County is in Massachusetts but doesn’t get local television news from Boston. Instead, the county gets TV news channels from Albany, New York, that don’t cover the Berkshires. Jin knows the area well. He was an intern for the Eagle and The Christian Science Monitor in Boston. And he went to college in western Massachusetts where he was editor-in-chief of The Williams Record, Williams College’s independent student newspaper. At the Record, he reported on low morale and pay disparities among college staff. During his first stint at the Eagle in 2018, he wrote local arts and feature stories. As a freelancer, he has also contributed to the Columbia Journalism Review. At Williams, he majored in American studies and rode for the cycling team. His parents emigrated from China following the 1989 Tiananmen Square protests.