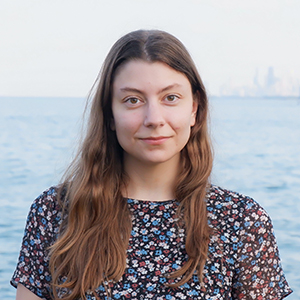 Elena Bruess covers drinking water issues and the environment for the San Antonio Express-News, focusing on development in Texas Hill country and the Edwards Aquifer. Previously, Bruess reported on national and international freshwater issues for Circle of Blue, a nonprofit environmental news organization. As a 2020 reporting fellow for the Pulitzer Center, she covered the disproportionate impact of COVID-19 on a primarily Latino neighborhood in Chicago. Bruess has reported on culture, comedy and food as a freelancer. She grew up in Iowa and Greece, and holds a bachelor’s degree from the University of Iowa’s undergraduate writing program. Bruess earned a master’s from the Northwestern University Medill School of Journalism, where she was awarded the Comer scholarship for environmental reporting.

This reporter explores the state of the Edwards Aquifer, the threats to it, the political influence of developers determined to build on top of it and the stakes for San Antonio. The reporter also covers the impact of climate change on South Texas and the progress of the city's ambitious Climate Action Plan.