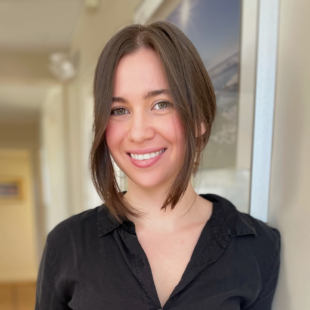 Eve was a producer for Radio Boston at WBUR, Boston’s NPR news station, where she produced daily segments and reported from the field on arts, culture, crime, justice, technology, business, politics and the environment. She interned and was a production assistant on the award-winning investigative podcast “Last Seen,” from WBUR and The Boston Globe, about the 1990 Isabella Stewart Gardner Museum heist. She earlier had internships at WBZ-CBS radio in Boston and worked in Ireland with Sounds Alive, creating long-form radio documentaries. She earned her BA from Boston University.

Eve works for WCAI as an environmental reporter, focusing on stories about how climate change affects people in the region. Cape Cod is at the forefront of some of the most hopeful efforts to combat climate change and reshape the forces contributing to it. The science critical to understanding the changing atmosphere is happening in laboratories in Woods Hole. Additionally, scientists from these laboratories are part of grass-roots level conversations about how we should respond to the environmental crisis. Cape Cod is home to the imminent launch of the nation’s largest offshore wind farm, just south of Martha’s Vineyard, which promises a new era in renewable energy. There are important, people-driven stories of innovation and adaptation to be told. WCAI’s science program host, Dr. Heather Goldstone, will serve a mentor for the environmental reporter, having covered this region and topic for years.

Beat: Climate change impact on Cape Cod and the south shore of Massachusetts