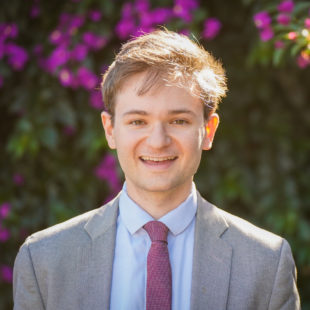 Graham Ambrose is a reporter for the Kentucky Center for Investigative Reporting. Based in Louisville, Ambrose focuses on the underreported problems with youth services throughout the Bluegrass State. Ambrose covered the Iowa presidential caucuses for the Quad-City Times in Davenport, Iowa. Previously he covered the fallout from the worst-ever flood of the Mississippi River and the hollowing out of the rural and industrial Midwest for the Dispatch-Argus, a newspaper in East Moline, Ill. He was an intern at The Boston Globe and The Denver Post. Graham has worked as a speechwriter, a public records redactor and a physics tutor, but his favorite job was youth baseball umpire. He holds a bachelor’s degree in history from Yale University, where he graduated summa cum laude.

This investigative reporter is focused on youth and social services. He is based in Louisville, with a budget for travel across the state and an expectation of spending time in western and eastern Kentucky as stories warrant. This reporter spends time at the Legislature and with agency leaders in Frankfort in addition to meaningful time in communities feeling the impact of legislative choices.