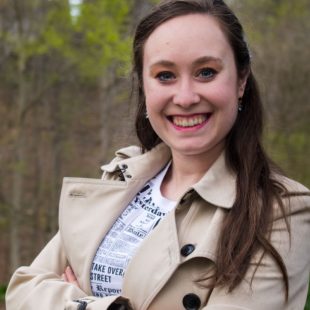 Heather Mongilio writes for the Capital Gazette in Annapolis, Maryland. She concentrates on military affairs, in particular, the U.S. Naval Academy in Annapolis and nearby Ft. Meade, home to the National Security Agency. Her reporting focuses on the locals who staff these nationally known institutions and how their work affects the region. Mongillo previously covered health, social services and Fort Detrick for The Frederick News-Post in Maryland. She also reported on crime and courts for the Carroll County Times. More of her work can be seen in Environmental Health News and PBS NOVA Next. She earned her master’s degree in science writing from the Massachusetts Institute of Technology (MIT) and her bachelor’s degree in journalism and psychology from American University, where she was editor-in-chief of its student newspaper, The Eagle. Mongilio grew up in Ellicott City, Maryland. Her reporting has been recognized by the Maryland, Delaware, and D.C. Press Association, including first and second-place awards for crime, health and investigative reporting. Among those honors was First Place investigative reporting for “What Happened to Amy Metz?” a project that raised questions about a woman found dead outdoors during a blizzard.

This military affairs beat is based in the Annapolis newsroom, but it extends to Washington, D.C., and beyond. It covers issues of leadership, national security, education and warfare. It brings the work of people who live here to our readers, and shows how the issues and people shaping national and global events are right in this community.