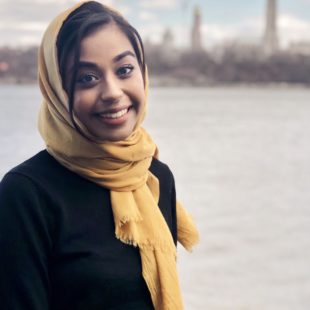 Hibah Ansari reports for Sahan Journal, a news organization based in Minnesota’s capital, St. Paul, that focuses on the state’s immigrants. At Sahan Journal, Ansari covers immigration policy, especially affecting Hmong, Somali, and Latino communities. Born and raised in Wisconsin, she holds a master of science degree from the Columbia University Graduate School of Journalism, where she was a Toni Stabile Center for Investigative Journalism student. She is a graduate of the University of Wisconsin-Madison. Previously, she was a reporting intern for USA Today Network in Wisconsin and Fox Cities Magazine in northeast Wisconsin. She has also contributed to the Wisconsin Center for Investigative Journalism.

This Reporter covers undercovered immigrant and refugee communities in Minnesota. The largest immigrant population in Minnesota is Latino, while its Somali community is the largest in the nation and the state boasts the second-largest Hmong population in the U.S. This Reporter helps Minnesotans better understand immigration policy and its affects on the state, and to better appreciate the immigrant cultures and communities that abound. Our work will be strengthened by journalists who are bilingual and who have specialized knowledge of immigrant communities.