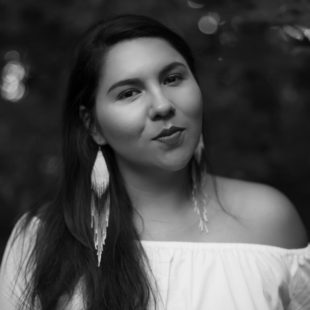 Jaida Grey Eagle reports for Sahan Journal, a news site in Minnesota’s capital, St. Paul, which focuses on immigrant communities. In her work as a photojournalist for Sahan, Grey Eagle covers Hmong, Somali and Latino communities. She is Oglala Lakota, and was born in Pine Ridge, South Dakota, and raised in Minneapolis, Minnesota. Grey Eagle is a photographer, producer, beadwork artist and writer. Her photography has been published in numerous publications such as Native People’s Magazine, Indian Country Today, Briarpatch, Vogue and Tribal College Journal. She is a co-producer on the Sisters Rising Documentary, which is the story of six Native American women reclaiming personal and tribal sovereignty in the face of ongoing sexual violence against Indigenous women in the United States and has recently received an Honorable Mention at the Big Sky Doc Festival. She received formal training in photography at the Institute of American Indian Arts in Santa Fe, New Mexico, and holds her Bachelors of Fine Arts with an emphasis in photography.

In 2017, nearly half a million foreign-born immigrants called Minnesota home, comprising nine percent of the population. This photojournalist captures the cultures and communities of immigrant Minnesotans. At a time when immigrants are targets of hateful rhetoric in politics and some media, more accurate and nuanced stories, photographs and video that present the reality of what it means to be an immigrant in Minnesota are more crucial than ever.