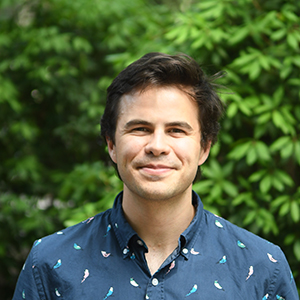 Jake Shore covers criminal justice in Savannah and coastal Georgia for The Current, a nonprofit news outlet based in Savannah. Prior to joining The Current, Shore worked as a senior writer for The Island Packet and The Beaufort Gazette papers near Hilton Head Island, South Carolina, covering breaking news, crime, courts and police. He reported on the Murdaugh saga, police misconduct and crime trends, and did a series on the rise of drivers suspended for being unable to pay their back traffic tickets. The series won several South Carolina Press Association awards in 2021. Shore graduated from Fordham University in the Bronx, where he got his start in journalism working as a radio reporter for the NPR-affiliate station WFUV. He hails from sunny California and misses In-N-Out Burger. In his free time, Shore runs and likes to read fiction. He’s currently seeking recommendations for fantasy and sci-fi novels.

There are no full-time reporters covering the courts and the police in coastal Georgia. This beat revives watchdog journalism in all of the eight counties The Current covers. The reporter focuses on criminal justice and the court system—county and federal courts, probate and bankruptcy hearings—developing sustained explanatory and accountability reporting about how local government, law enforcement and courts work well, and how they fail us.