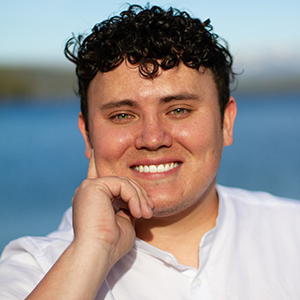 Jarrette Werk is the Indigenous affairs reporter for Underscore, a nonprofit digital news organization with a focus on Indian Country and other marginalized coverage areas, based in Portland, Oregon. Werk is a multimedia journalist, and a recent graduate of the University of Nevada, Reno with a bachelor’s degree in journalism. Originally from Montana, he is a proud member of the Aaniiih and Nakoda tribes of the Fort Belknap Indian Community. Werk was an associate producer for Nevada Public Radio’s “Native Nevada Podcast,” a podcast series highlighting the culture, issues, and perseverance of the 27 tribal nations in present-day Nevada, and he has interned with First Nation Focus magazine. One of Werk’s passions is portrait photography, and his ultimate goal is to take a portrait of at least one member of every tribal nation throughout Indian County. Currently, there are nearly 600 tribes in the U.S.

Indian Country is not well represented in local, regional or national media, which is why this beat reports on rural and urban Indigenous communities in the region. In conjunction with Indian Country Today, the reporter builds trust, learns the issues, and develops reliable sources to report in-depth stories.