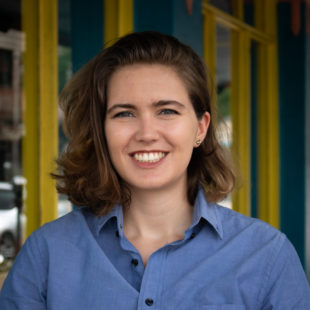 Kailey Broussard is an accountability reporter covering Arlington, Texas for KERA/The Texas Newsroom. With a population of almost 400,000 people, Arlington is among the nation’s largest cities with no daily professional news presence. While pursuing her journalism degree at the Walter Cronkite School of Journalism and Mass Communication at Arizona State University, she reported on Arizona’s congressional delegation in Washington D.C., pedestrian fatalities in the Sun Belt, and Venezuelan refugees in Peru as well as U.S. disaster response through a 2019 Carnegie-Knight News21 reporting fellowship. She holds an MMC from Arizona State University and a B.A. from the University of Louisiana at Lafayette. Originally from Louisiana, Broussard spent two years interning and freelancing for The Advocate in Baton Rouge and four years as a staff writer and editor for her student paper, The Vermilion. Her work has won recognition from the Society of Professional Journalists regions 11 and 12, Southeast Journalism Conference, Arizona Press Club, and Broadcast Education Association.

Beat: Accountability reporting for the city of Arlington

Arlington, a city of 398,000 people, is among the largest cities in the country with no daily professional news presence. This Reporter's coverage helps citizens be more informed and engaged, make better decisions and hold leaders accountable.