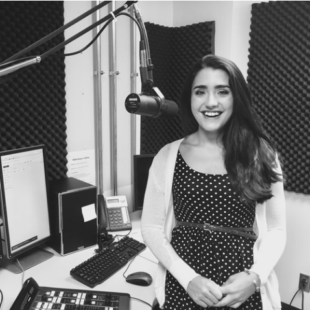 Kassidy Arena covers the Iowa statehouse for Iowa Public Radio, focusing on undercovered issues of interest to the booming Latino population. She helped cover global human rights violations and conditions during her internship at RUIDO Photo in Barcelona, Spain. She was a host, producer, and reporter for KBIA, the NPR member station in Columbia, Missouri. During the spread of the COVID-19 pandemic, Kassidy continued to report remotely for Missouri News Network about state issues and politics. Kassidy graduated from the University of Missouri/Columbia with a degree in convergence radio reporting and producing in May 2020. She is originally from Berkeley, California but grew up in Omaha, Nebraska.

This Reporter focuses on three counties in particular where Latino residents comprise more than 22% of the population, including West Liberty, Iowa’s first majority-minority community. The Reporter also supports our Election 2020 coverage, ensuring a more representative election reporting cycle. During the legislative session in 2021, this beat will focus on legislative issues important to underserved populations. They are based at the statehouse and work closely with our fulltime statehouse Reporter and News Director. Other beat topics include issues and concerns around the 2020 census, particularly around minority and undocumented communities within Iowa, particularly Latino communities.