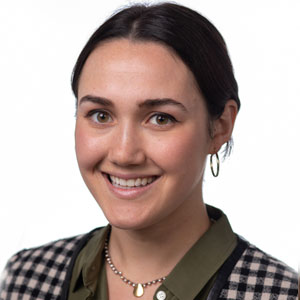 Kate has been an intern, fellow and reporter at Texas Monthly, Texas Observer, Quartz, the Texas Standard, and Voces, an oral history project. More recently, at the Observer, she covered the Texas state legislature. She received her B.A. from Brown University, where she majored in English and wrote for the Brown Daily Herald, and M.A. from the University of Texas Moody School of Journalism, where she also worked as an audio storytelling teaching assistant.

Like its physical landscape, southern Utah is a desert. The five major Native American tribes in the state are underrepresented, and environmental coverage in the area doesn’t explore critical issues like water usage in the driest parts of Utah. Kate covers indigenous issues in southern Utah, with an eye towards voting rights and representation, growth, energy, water and the environment. She works in dual capacities as a half-time general assignment reporter helping to cover the region and a half-time beat reporter. With a focus on the southern half of Utah, in a state that is sparsely populated yet expansive, Kate not only reaches a broader audience but also serves a population that often lacks reporting that touches on their lives.