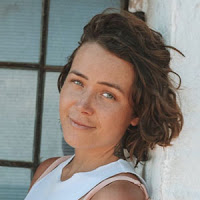 Katherine began her reporting career at Miami Today News and has worked as a freelance multimedia producer for Al Jazeera. In 2018, she received a grant from the Pulitzer Center for Crisis Reporting to cover Cuba’s housing crisis. Katherine has won several awards from the Society of Professional Journalists for both her reporting and photo essays. She earned a B.A. in journalism from Flagler College, where she worked at The Gargoyle student newspaper producing award-winning coverage of refugees and civil rights in Northeast Florida.

Katherine is assigned to cover Santa Fe’s Southside — its immigrant and indigenous communities, service industry workers, entrepreneurs and families — through stories that impact their lives. She covers the business and culture outside of the city’s contemporary downtown core, especially taking into account women, people of color, historical context, access to health care and education. Santa Fe has become increasingly divided by wealth and poverty. Power is concentrated among the aging elite in the east and north sides, while young families and the middle class living on the Southside often are shorted when it comes to services. Median housing prices are at an all-time high all over the city, and while the Southside has the lowest-priced housing, it has food deserts and fewer services. Until the last two years, there were few doctor’s offices. Despite city efforts to encourage more diverse grocery store and restaurant choices, they are few and far between. Schools are crowded, and developed open spaces such as parks aren’t as prevalent. But in all these instances, there are people and organizations working toward equity and improved quality of life. Katherine works to tell these stories.