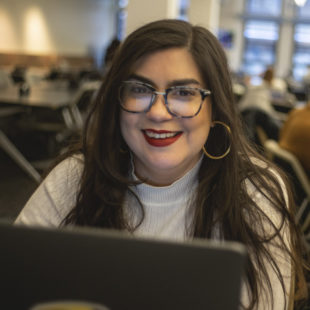 Natalia Rodríguez Medina covers the Puerto Rican community in Rochester, New York, for the Democrat & Chronicle. A native of Puerto Rico, she’s an alumna of the Craig Newmark Graduate School of Journalism at the City University of New York with a concentration in Spanish language and health and science, and also of the University of Puerto Rico, where she majored in journalism. She’s been a reporter for Diálogo, the paper of the University of Puerto Rico, covering myriad topics including strikes, local politics, health, culture and even Puerto Rico Comic-Con. Throughout her schooling as an undergrad and graduate student, she was also a freelance writer and a translator. She interned at Latino Rebels in New York City, where she was a correspondent covering Latino issues and protests in Puerto Rico.

Rochester has among the highest percentages of Puerto Rican residents of any large city in America. After Hurricane Maria, thousands more Spanish-speaking residents moved here. Nearly 18% of the city’s population is Puerto Rican, but there is very little news in Spanish. Filling this gap is critical to informing and engaging these citizens. This reporter is fluent in Spanish and familiar with Latino culture. She teams with our emerging audiences editor to focus on our Puerto Rican population, creating enterprise content that is relevant to them and contributes to greater cultural awareness throughout our community. This reporter also translates some content from other reporters.