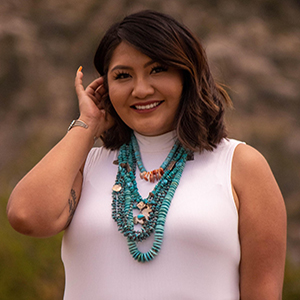 Pauly Denetclaw reports for the Texas Observer, an Austin-based nonprofit news organization, covering the state’s Indigenous communities. Before coming to the Observer, she was a reporter for the Navajo Times in Window Rock, Arizona, covering youth, LGBTQ2S+, arts, culture, and more. Denetclaw is a citizen of the Navajo Nation and grew up in Manuelito, New Mexico. She’s Haltsooí (Meadow People, her mother’s clan), and Kinyaa’áanii (Towering House People, her father’s clan). Denetclaw’s work earned her the Arizona Press Club’s top award for both breaking news in the community and coverage of social issues. A recipient of the Native American Journalists Association’s award for investigative reporting, Denetclaw teamed up with a journalist to reveal the effects of the Gold King Mine waste spill on tribal communities in New Mexico for National Native News, which airs on radio stations in the U.S. and Canada.

Texas has six state and federally recognized tribes and have been historically excluded by newsrooms around the state. The reporter produces regular enterprise pieces and help to establish a permanent Indigenous affairs newsroom presence in the Lone Star State.