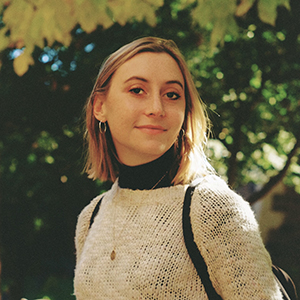 Rachel Hellman reports on the challenges and opportunities in Vermont’s small towns for Seven Days, a weekly paper and news site based in Burlington, Vermont. Previously, Hellman was a freelance journalist and her writing, which focused on the societal and environmental impact of climate change, appeared in The Guardian, The Boston Globe, Fortune, and U.S. News & World Report. As an intern for CBS News, Hellman assisted in producing a groundbreaking nationwide investigation into the changes that police departments in the U.S. have made over the past five years regarding race and policing. Since graduating magna cum laude from Washington University in St. Louis in 2020, she has worked on a carpentry team for the Vermont Youth Conservation Corps, on an all-women farm crew in central Vermont, and as a commercial pie baker in Brooklyn, New York.

Most Vermonters live in small towns with aging populations, and the state’s lack of school-age children is leading schools to close. Rural residents have to scratch out a living, and there's a lack of broadband in swaths of Vermont. But the pandemic also highlighted what’s great about these small towns. Many families relocated from urban areas, reinvigorating these towns, and venture capital and startup companies started flowing here from across the borders. This reporter covers how the towns are adapting, following real estate, economic development and demographic stories, writing about the challenges, opportunities and innovations.