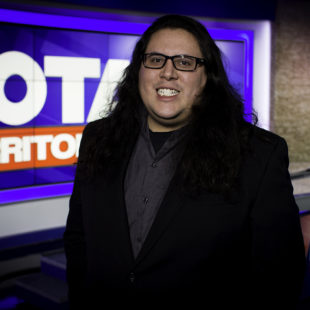 Richard Two Bulls covers ethnic communities for South Dakota Public Television including the state’s nine Native American Reservations. He has spent most of the last decade reporting in Rapid City, South Dakota, for local television stations KOTA Territory News and KEVN Black Hills, a FOX affiliate. Being an enrolled member of the Oglala Sioux Tribe on the Pine Ridge Indian Reservation, Two Bulls has covered a vast variety of topics that directly relate to Native Americans. One of his stories he is especially proud of includes a narrative on the Native American Arts and Crafts Act. He is also passionate about telling stories that preserve the Lakota language. Over the years he has done stories with groups that aim to teach the language in full immersion to children starting in preschool. Two Bulls has covered a wide variety of news from Rapid City. In 2019, he and a colleague were awarded an “Eric Sevareid Award” from the Midwest Broadcast Journalist Association for a piece called “Sold for Sex: Trapped By Fear.” Two Bulls was born in Rapid City but was raised on different reservations throughout the U.S. He is a U.S. Navy veteran and was a Mass Communication Specialist. Two Bulls, his fiancée and their son call the Black Hills their home.

South Dakota has nine Native American Reservations. There are 86 different languages spoken in Sioux Falls, the state’s largest school district. While most of the population is white, the state is more and more diverse. This energetic, organized and goal-focused multi-platform journalist covers news with a special focus on diversity and representation. This role seeks out new voices that represent different heritages, languages, and traditions; spots trends, navigates cultural differences, and writes stories that introduce South Dakotans to their neighbors. This position leads work on a statewide network for a discerning audience that appreciates and supports good local journalism.