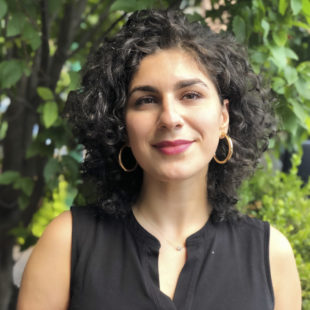 Seyma Bayram covers minority and immigrant communities for the Akron Beacon Journal in Akron, Ohio. Previously, Bayram was a staff reporter at the Jackson Free Press in Jackson, Mississippi, where she covered local government and criminal justice. Her reporting on Mississippi’s sentencing laws and efforts to prevent the state from demolishing a Jackson landmark earned Bayram two first-place awards from the Associated Press. She was an invited speaker to the Robert Wood Johnson Foundation’s 2020 Sharing Knowledge Conference on a panel about the intersection of public health and mass incarceration. Before journalism, Bayram worked as a high-school writing teacher in Brooklyn, New York, and as a book editor for a European experimental arts non-profit organization, where she collaborated on several anthologies that examine the role of culture in contemporary political movements. She is a graduate of Columbia University’s School of Journalism and she received an M.A. and B.A. from the State University of New York at Binghamton. She is from the Kurdish region of Turkey and was raised in The Netherlands and upstate New York.

This reporter covers underrepresented communities, including African Americans (who earn 53 cents for every dollar white residents earn) and immigrants who are coming to our coverage area. From 2007 to 2017, roughly 2,700 refugees from Bhutan arrived in Akron. The beat focuses on income inequality, poverty, jobs, housing, redevelopment, and efforts by residents to overcome other obstacles identified in our 2019 “This is Akron” series. The reporter has skills for crunching basic census data, building relationships, creating multimedia and telling great stories.