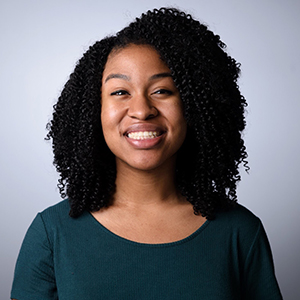 Tiana Woodard covers Black neighborhoods in and around Boston for The Boston Globe. A 2021 graduate of The University of Texas at Austin, Woodard studied journalism and English, co-founded the university’s only Black-interest publication, BlackPrint, and worked as the first diversity and inclusion director at The Daily Texan, the college paper. She was one of five student journalists selected for ProPublica’s Emerging Reporters 2019-20 program and is a recipient of a Facebook Journalism Project Scholarship. You can find her bylines in The Dallas Morning News, The Texas Tribune and The Indianapolis Star. In her spare time Woodard enjoys binge-watching “Jeopardy,” feeding table scraps to her spoiled Airedale terrier Pierre or connecting any current event to Prince. She grew up outside of Nashville, Tennessee but has called Beaumont, Texas her home for 12 years.

Coverage of majority Black and POC neighborhoods in and around Boston. This beat will focus on the impact of COVID 19, the movement for social and racial justice and the economic downturn, with special attention paid to the culture, triumphs, challenges and perspectives of the people who live there.