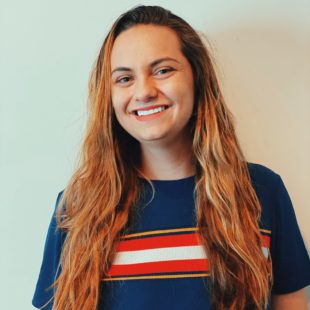 Tobie Nell Perkins reports for The Herald, Rock Hill, S.C. where she focuses on struggling Chester County, which is still reeling from decades of textile mill closures. Before coming to South Carolina, Perkins spent the last year writing feature and long-form stories for Fresh Take Florida, a news service based at the University of Florida where she graduated with a degree in journalism. Her stories, distributed through Fresh Take Florida, have been published in the San Francisco Chronicle, the Palm Beach Post, the Orlando Sentinel, the Kentucky Herald-Leader and more. She has written for WUFT.org, the University of Florida’s NPR and PBS affiliate, since 2018. Tobie grew up near  Philadelphia, PA. She was the 2020 recipient of the John Paul Jones Jr. Award for Magazine Writing. Perkins was one of two nominees from the University of Florida to be chosen to compete for the National Hearst Award both in Feature Writing and Sports Writing. And she was a varsity member of the university’s Equestrian Team.

When its textile mills closed decades ago, Chester County was left to economic struggle. The impact of that loss has not been fully explored, but there are some clear consequences: The county ranks among the lowest in income, while just 38 percent of the total population has a high school diploma and 18 percent have a college degree. There's an ongoing debate about whether to spend money for a new career center or fix older schools that lack amenities such as Internet access. One bond vote has failed because voters could not agree on what should have higher priority. This Reporter covers these issues and others, including poverty, the lack of affordable housing and the fair distribution of economic development.