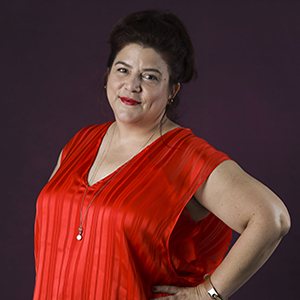 Vanessa Colon Almenas helps lead a team of reporters for the Centro de Periodismo Investigativo (CPI), a nonprofit investigative news organization. Colon Almenas, who was born and raised in Puerto Rico, and her team are delving into the island’s recovery efforts following Hurricane Maria in 2017. With more than 25 years of journalism experience, she has worked as a reporter, a deputy director and a multimedia editor at Primera Hora, a newspaper. Later, she was the digital deputy director of Puerto Rico’s two largest news sites, El Nuevo Dia and Primera Hora. Colon Almenas recently completed her master’s at the Craig Newmark Graduate School of Journalism at the City University of New York. As an independent journalist her work has been published by the CPI, City Limits, Latino Rebels and CNN en Español.

Beat: Reporter/editor to work on government accountability in the wake of hurricane Maria.

This experienced reporter will help lead an award-winning team of CIP reporters, who delve into Puerto Rico's recovery efforts following the 2017 Hurricane Maria, which devastated the island. They track the public dollars being spent on housing, schools and other public entities.