Alexandra Watts is a Report for America corps member who covers the Delta for Mississippi Public Broadcasting. Her stories touch on a variety of issues that imapct daily life in the region, with some stories focusing on opportunities for young people and their role in the local economy. Watts answered a few questions about her work as a local journalist for the latest edition of the Report Local newsletter.

1) Why did you decide to become a Report for America corps member?
I’m from Phoenix, Arizona, and I always felt informed living there. I could wake up and listen to our public radio station, watch a local news channel or read a newspaper, but I soon learned that my news consumption and access was a luxury. That scared me.

I also feel like we’re living in such an important time in history. Future generations are going to have so many questions for us and what we were doing. There are so many ways to give back and take action, and my way is by informing communities.

When the past few years are finally written about in textbooks, the news will play a huge role — both as a subject and as a reference point. But there is no way news coverage can be an accurate source if there are so many communities and people are not covered.

2) What was your familiarity with life in the Delta before beginning your role with MPB? How did you begin to learn about its communities and find stories when first starting out?

I was familiar with the Delta’s culture — especially its music. As a teenager, I developed a deep love for British rock music. You can’t have The Beatles or The Rolling Stones without Robert Johnson or BB King.

Before I moved, I kept up with news coverage in the Delta, and when I got here, I spent time having conversations with people in the community. I also followed my interests and explored a lot — which is something I still do today.

3) What do you see as being some of the biggest public policy and/or social justice issues in the region that affect residents, and how can journalists help address those issues?

Poverty is a major issue and it affects everything from food insecurity to education.

The Delta is also a large region. Some issues are prevalent throughout, but each area has its different issues. I think in covering such a large area, collaborations between newsrooms are super beneficial.

There are also so many stereotypes surrounding Mississippi.

As a journalist, I’m aware of two different parts of my audience— those who live in Mississippi and those who do not and have a pre-conceived view of the state. I’m not from this state, so I am hyperaware of how I put news stories in context in relation to the past. History is so important for understanding where we are now, and I’m working to report on the current events and issues of the Mississippi Delta.

4) As an audio reporter, you deliver stories in a unique and growing medium. How does the audio medium lend itself to telling local stories?

Actually hearing people tell their own stories is so powerful, and I think it connects with audiences. I think it’s why podcasting has become such a popular medium, too. With audio stories, you can really use sound to help people experience the news they’re hearing.

5)  What’s your favorite part about being a local journalist? Are there any specific encounters or stories that stand out to you as examples of how you knew your presence and coverage was making a difference?

I really enjoy talking with people from all around the Delta. Yes, these conversations may include me checking my recorder and headphones and doing more listening instead of talking, but I do think of these as conversations.

I’ve learned a lot from even the shortest talks I’ve had.

Seeing my stories being shared by other members of the community is a great feeling. I did a story about a superintendent giving up a portion of his salary to help his district, and seeing the local response to that was incredible.

Having people who thank me just for an interview or listening to them is also a really good feeling. I’m not giving a voice to the voiceless, because the “voiceless” have a voice. I’m here to listen. 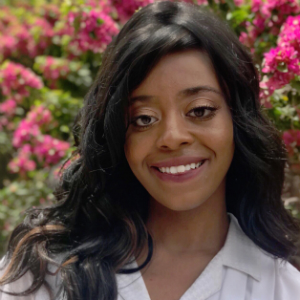 Alexandra Watts was a 2017 Next Generation Radio Fellow with NPR in 2017. While at Arizona State University, she became the first ever audio and podcast editor for The State Press, and she worked on podcasts/audio with the news division of Arizona PBS. Watts has a BA & MMC from the Walter Cronkite School of Journalism and Mass Communication. She had internships with KJZZ and worked in community engagement with the PIN Bureau, where she was part of the team who won the Associated Press Media Editors’ Innovator of the Year Award for College Students.