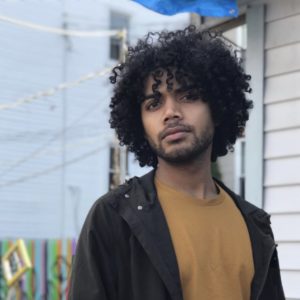 Pascal Sabino is a 2019 Report for America corps member who covers the Chicago West Side neighborhoods of Austin and North Lawndale digital news nonprofit Block Club Chicago. He’s from the south side of Chicago and previously covered environmental health in his hometown for the Real Chi, a local news lab with a mission of providing equitable, accountable news coverage for Chicago communities misrepresented by traditional media narratives. Pascal brings that same ethos to his coverage for Block Club, where his community-first coverage spans initiatives to promote healthy eating to ways that nonprofits are supporting affordable housing. He’s also focused on environmental justice, and has reported on a controversial asphalt plant that opened up on the same block as two schools and by a major city park, and how neighbors didn’t have a chance to weigh in on whether the plant could get permits to be built in the first place.

Before returning to his hometown, Pascal worked as an editor for international business publications in Turkey, the UAE, Oman, and Indonesia. Pascal is a 2015 graduate of Pomona College in Claremont, CA. Pascal answered a few questions about his work for this month’s Corps Member Q&A. This interview has been edited.

1) Your stories focus on the Austin and North Lawndale neighborhoods of Chicago. What are the main topics that your beat touches, and how do you approach them?

Environmental health and urban agriculture are two big things for me. One thing I want to make sure to do is solutions journalism. The fact that the west side of Chicago is largely a news desert and media desert means people don’t know what’s going on in their own neighborhood, which is a shame … people live incredible, robust lives. People on the west side have tons of achievements that need to be celebrated, so I’m looking forward to doing those pieces that help people the normalcy of life on the west side. The west side is not a war zone, there are opportunities that people should know about and wouldn’t know about without the work of good journalism and reporting.

2) As a reporter in your hometown, why do you feel it is important for journalists to have an innate understanding of the communities they cover?

As journalists, there’s this notion of objectivity which I think is still pretty ridiculous. There’s no such thing as objectivity … We are supposed to have a stake in the communities that we’re reporting on. I think part of the reason why journalism has had so many issues with exploiting the people that journalists are reporting on is because of this notion of objectivity and thinking ‘Oh, there’s a starving child over there. Let’s report on it, but not feed them.’

3) Several of your stories have focused on art and creativity, including a story about a West Side art walk and one about a local news organization’s free coffee table book. What role do you see art and expression playing in the communities you cover?

Art is a way of turning pain into pleasure, and taking something very, very difficult and giving it more life and letting it be reborn into something that can put beauty into the world. I think art is really an important organizing tactic and a very important source of activism. Because of the circumstances out on the west side of Chicago, there is such an incredible and resilient culture of art. And people use art to do all kinds of incredible things. One story I did a couple of weeks ago was on this old and dilapidated golf course that an artist came upon and said ‘Let’s turn this into a real functioning golf course so the community can have this again,’ and turned nothing into something that’s going to be in the community for decades and decades. I think that’s incredible.

I write about those stories because I think those are things that absolutely need to be celebrated, and I also think that people should have access and be able to participate. I hope my work can help people be able to do that.

4)  A central part of RFA’s mission is to send reporters to news deserts and tell the stories of under-covered communities. When you are working on stories about people, places or topics that haven’t been covered much in the past, what is your approach to building trust with sources?

The community isn’t there to serve reporters. Reporters are there to serve the community. It’s about being present and going to every public meeting possible, getting familiar with the local officials … it’s about getting familiar with those folks and becoming embedded and becoming a part of the community. Through that, what’s most important is we employ some engagement strategies so we’re not doing stories that aren’t useful to the people who the story is about. If I’m writing an education story, I want it to be useful to parents on the West Side.

Whenever I go to these community meetings, I always make sure to ask, ‘What’s something you don’t know about your community that would be useful, or what’s a problem you might be having that would be useful to get more information on?’ I think that’s a great place for a story to come from, but also a great way of building trust with the community so that places in our country that haven’t relied on news haven’t had a good relationship with news can actually start to benefit from it for the first time in a long time.

5) What’s your favorite part about being a local news journalist?

What I love about local journalism is you can look at a very specific circumstance, it’s almost like a test case, and use it to really interrogate these large systems that we accept as normal. When sometimes, stuff should not be accepted as normal. It should be interrogated and potentially torn down.