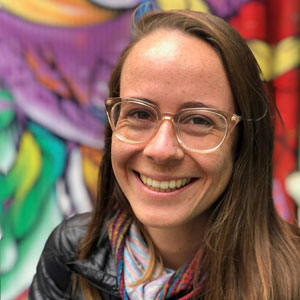 2019 corps member Camille von Kaenel covers wildfire recovery for the Chico Enterprise-Record in Northern California, focusing on a region that was devasted by 2018’s deadly Camp Fire. She brings experience in environmental reporting, having covered climate change policy for E&E News in Washington, D.C. Her writing has also appeared in Fast Company, Atlas Obscura, and The Alpinist, among others.

At the Chico Enterprise-Record, Camille’s stories take readers into the intimate developments of the aftermath of a disaster, like the Paradise families who are rebuilding their homes and the emotional re-opening of the local library. She also works to holds institutions accountable with stories that look at settlement funds flowing to affected counties and the immense demand on affordable housing agencies that causes Section 8 voucher holders to go without homes. Recently, she explained how residents whose homes survived are still working out details with their insurance companies and trying to understand the health risk of the smoke and ash that soaked into their homes.

Born in Switzerland and raised in California, she has a bachelor’s in international relations from the University of Geneva and a master’s in journalism from Columbia University in New York. Camille answered a few questions about her work for this month’s Corps Member Q&A.

1)  Why did you decide to apply to Report for America?

The mission resonated with me. I’ve always considered joining a national or international service program. Given the crisis in local journalism, I saw a role for myself documenting and sharing the stories of people’s lives. I have also long wanted to mentor young people in journalism.

It was a good fit professionally. I had been writing about national energy and environment issues from Washington D.C. for a few years, but what I really wanted to do was write about them as they played out in a community. I also wanted to bring my career back West.

2) You grew up in the Bay Area and returned to California for this position covering wildfires and the Camp Fire recovery for the Chico Enterprise-Record. What’s it like to return to your home state as a reporter, and how has your previous knowledge of the state and region helped inform your reporting?

I’m happy to be back in California because I’m closer to my family and the mountains I love. Wildfires have impacted people I know so covering the issue is personal, like it is for so many Californians. With even a small something at stake, I’m motivated to do a good job.

Having general knowledge about the state and its politics, geography, and culture has without a doubt helped me dive in and build trust with locals more quickly, too.

That being said, I always knew the Bay Area was very different economically and culturally from Chico and especially Paradise. This particular region was mostly unfamiliar to me before and I’m learning a lot. The half-insider, half-outsider status is especially useful, I think, for reporting undercovered issues.

3) Even for a reporter with some familiarity of the area, getting into a new beat can be quite a challenge. What were the steps you took to learn about how recovery efforts were going when you first started on the ground, and how have you connected with sources?

It helps to have a good introduction — I get street cred for showing up with my coworker who’s been reporting on Paradise for decades. Really, the best strategy has just been being present in the places I’m covering. I go to a lot of gatherings, like weekly community dinners or recovery task force meetings, even if I don’t have a particular story in mind. Sometimes, I work from the Paradise Starbucks or library, and I regularly run into people I want to catch up with, whether they’re state or local officials or residents. Lots of people are very active on Facebook, too, so I’ve leaned into that.

Being transparent about why I’m here and asking for help has been beneficial. I sent out a survey asking for input when I started, partly to help me prioritize my coverage. I got some good story leads but practically every person had a different priority, whether it was health or accountability or rebuilding. It was a lesson for me that my beat is complex because it’s made up of all of these very individual, deeply personal stories. So I try to talk to people on that level. I try to take a trauma-informed approach and follow up to see how they’re doing.

4) How have readers responded to your coverage of the Camp Fire recovery efforts? What types of stories are resonating with the community as they rebuild their homes and lives?

People have reached out to say that my attention on key issues like housing and health brings them hope.

Many have asked for “positive” stories. At the very beginning, I had a resistance to that because I thought they were asking for what I saw as fluffy stories about non-systemic solutions. But I think I’ve learned what they meant. The whole story of the Camp Fire includes what’s going wrong — like the continued lack of shelter for many survivors or the widespread post-traumatic stress — and what’s going right — like the solidarity between neighbors. And recovery is by definition a positive story. Every day there are businesses reopening and personal and community milestones. It takes someone who’s in the community every day to see and record those incremental shifts.

5) What’s your favorite part about being a local news journalist?

Really, my favorite part is the connection to the people I report on and for. They’ve welcomed me as a friend in a way I didn’t anticipate. They make me feel like I’m a part of something special. I’d put the opportunity to be out and about every day in second place.