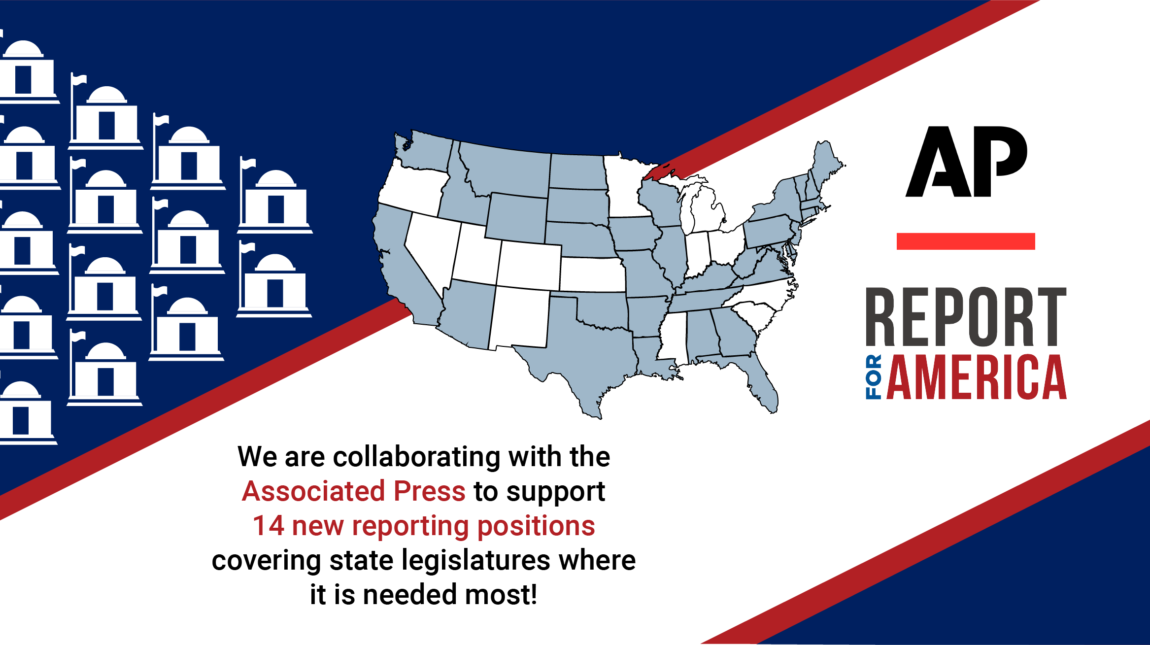 New initiative launched with support from the Joyce Foundation in the Great Lakes, other national funders

Report for America to support 14 new reporting positions covering state legislatures in areas of highest need with The Associated Press across the country.

New York, New York — Report for America today announced a major new initiative in collaboration with The Associated Press to dramatically bolster coverage of state government where it’s needed most.

As part of its 2020-2021 corps, Report for America will field 14 journalists in this special cohort hosted by AP, the trusted not-for-profit global news network. Additional statehouse positions hosted by local news organizations across the country will be announced next week. Report for America is an initiative of The GroundTruth Project.

“One of the most important crises facing our democracy is the alarming shortage of local news coverage about state government, which determines much of the public policy affecting the lives of Americans,” said Report for America President Steven Waldman. “Although Congress gets far more attention, state government has at least as much impact and garners far fewer headlines. We are proud to work with The Associated Press, which has long been the national leader in providing statehouse coverage.”

This groundbreaking initiative is made possible by the Joyce Foundation, which will generously support statehouse and policy coverage in the Great Lakes region, as well as Report for America’s other leading supporters, including the Knight Foundation and the Facebook Journalism Project.

“Joyce is so pleased to support this partnership between Report for America and The Associated Press to help bolster statehouse coverage in our region. Public policy that affects the lives of millions of people is decided at the state level and this initiative will help ensure that the public is better informed about how their government works,” said Carrie Davis, director of Joyce’s Democracy Program.

The AP reporters will be located in: Colorado, Indiana, Kansas, Michigan, Minnesota, Mississippi, Nevada, New Mexico, North Carolina, Ohio, Oregon, South Carolina and Utah. A data journalist will support their efforts and work to bring policy journalism to all 50 states.

Positions to be sponsored by local news organizations across additional states will be announced in early December. Journalists can begin applying for these and other positions at that time.

All legislative corps members will begin their beats in June 2020.  They will be joined by a large class of other Report for America corps members who will be reporting on underserved communities throughout the country. Each corps member will be a full-time reporter in their host newsroom. They will also work on a yearlong community project focused on youth and media—a hallmark of the Report for America national service program.

Reporting locations for the Report for America-Associated Press collaboration were selected through a highly competitive process. As part of that process, AP analyzed the capacity of legislative coverage in different states to understand the biggest statehouse reporting needs nationally.

“An investment in AP at the statehouse is an investment in the health of an entire state news ecosystem,” said Noreen Gillespie, AP deputy managing editor for U.S. news. “We are pleased to be working with Report for America to ensure citizens have better and more access to information about their government at work, from budgets and policy issues to holding elected officials accountable.”

“The collaboration includes an exciting new commitment by The Associated Press to more broadly distribute statehouse coverage throughout the country,” said Charles Sennott, CEO of The GroundTruth Project and Co-Founder of Report for America. “We are so honored to have support and partnership from organizations like Joyce and our other national donors to better meet this critical need.”

AP will make available the reporting of its Report for America journalists not only to its member news organizations and customers, but also to other publications throughout the state, including qualified nonprofit news organizations, public radio stations and independent digital news sites. AP will also distribute many stories by Report for America statehouse journalists affiliated with other newsrooms.

Report for America and AP will share the cost of the salary of the reporter, who will work for 18 months on that beat.

About The Associated Press

The Associated Press is the essential global news network, delivering fast, unbiased news from every corner of the world to all media platforms and formats. Founded in 1846, AP today is the most trusted source of independent news and information. On any given day, more than half the world’s population sees news from AP. On the web: www.ap.org.

About The GroundTruth Project, home to Report for America

The GroundTruth Project is an award-winning, independent, nonpartisan, nonprofit news organization dedicated to supporting the next generation of journalists in the U.S. and around the world. Our mission is to restore journalism from the ground up by supporting emerging journalists through field reporting that serves under-covered corners of the United States and the world. GroundTruth launched Report for America, a national service reporting program in 2017, to strengthen our communities and our democracy through local journalism that is truthful, fearless, fair and smart.