Local news has been gasping for air for several years now, exasperated by shrinking advertising revenue, and more recently, the coronavirus. Yet Report for America’s Todd Franko has more than two million reasons to be grateful this year—$2.1 million, to be specific. 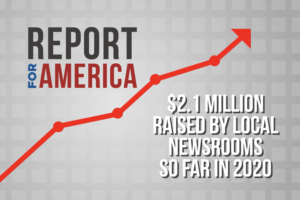 Franko is leading efforts to help partner newsrooms raise funds locally to support the hiring of emerging journalists who are focused on reporting under-covered issues. In 2019, Report for America helped its partners raise more than $800,000. Now at $2.1 million to date, it is on track to quickly surpass this year’s goal of $2.5 million.

“Report for America introduces the idea of donor journalism to many American cities, media groups and foundations. Our playbook is not just working, but groups are taking it and running further than we expected,” said Franko, director of local sustainability and development.

Franko has a unique understanding of the challenges facing today’s local newsrooms. He was the editor of The Vindicator, a daily newspaper that served Youngstown, Ohio, for 150 years before its printing presses stopped in 2019.

The biggest challenge, Franko says, is that with the exception of nonprofit newsrooms like public radio, fundraising is a new source of revenue for many newsrooms. Additionally, many potential funders are unaware of just how badly local news is struggling.

According to a Pew Research study, about seven in ten Americans think their local news outlets are doing very or somewhat well financially (71 percent). Meanwhile, the reality is that newsroom employment decreased 23 percent from 2008-2018. The impact of COVID-19 has created further layoffs and furloughs.

Report for America helps its partners overcome this by providing fundraising coaching and marketing materials. Additionally, Report for America is an initiative of the GroundTruth Project, a nonprofit media organization that acts as the fiscal sponsor for the newsrooms. One hundred percent of all donations and sponsorships GroundTruth receives for local newsrooms directly support reporting for their communities.

The most significant gift to date has been from the Missouri Foundation for Health, which awarded a $250,000 grant to support statewide reporting on gun violence at the Kansas City Star.

“The relationship between us and Report for America was crucial in securing that $250,000 in funding,” said Greg Farmer, managing editor of the Kansas City Star. “Journalists have to aim higher. Our work is valuable and we have to be willing to ask for what we need to actually fund the journalism that we want to do.”

Many other newsrooms are finding success through grassroots efforts. The Raleigh News and Observer started its outreach to its readers this April, and has already raised more than $60,000. The Berkshire Eagle has had a campaign of equal amounts in their first year of Report for America donor journalism work.

As important as the donations are, Franko finds equal gratification in the messages that often accompany the gifts of individual donors about what motivates their support.

“Comments that come in with donations show that regular America gets it. People see what is happening at national and local levels, and they are able to connect the dots back to lost reporting in their communities. They want it back,” he said.

For example, a donor to Mountain State Spotlight wrote, “I really want to see this team succeed. We need you here in West Virginia. I love my state and you can help fertilize the ground to grow open minds. I support you for the sake of my grand babies.”

Franko is joined at Report for America by Deidra Parrish Williams in making local donor journalism happen. Based in Charlotte, Williams has had a distinguished 30-year career spanning corporate communications, nonprofit management and journalism, including leadership roles at QBE North America, NuHealth Foundation and Newsday.

James Martinez will join their team Aug. 17. Martinez is based in Dallas and has worked with Liberty Hill Foundation in Los Angeles, and Fidelity Charitable in Texas, for the last 10 years. Additionally, he launched a community-based Dallas Forward Fund, to address social and economic justice for Dallas-based groups.

Report for America is looking to fill similar roles in other regions of the country. To learn more about Report for America’s efforts to promote local sustainability of local newsrooms, visit www.reportforamerica.org.