“I’m Really Glad I Found Them” 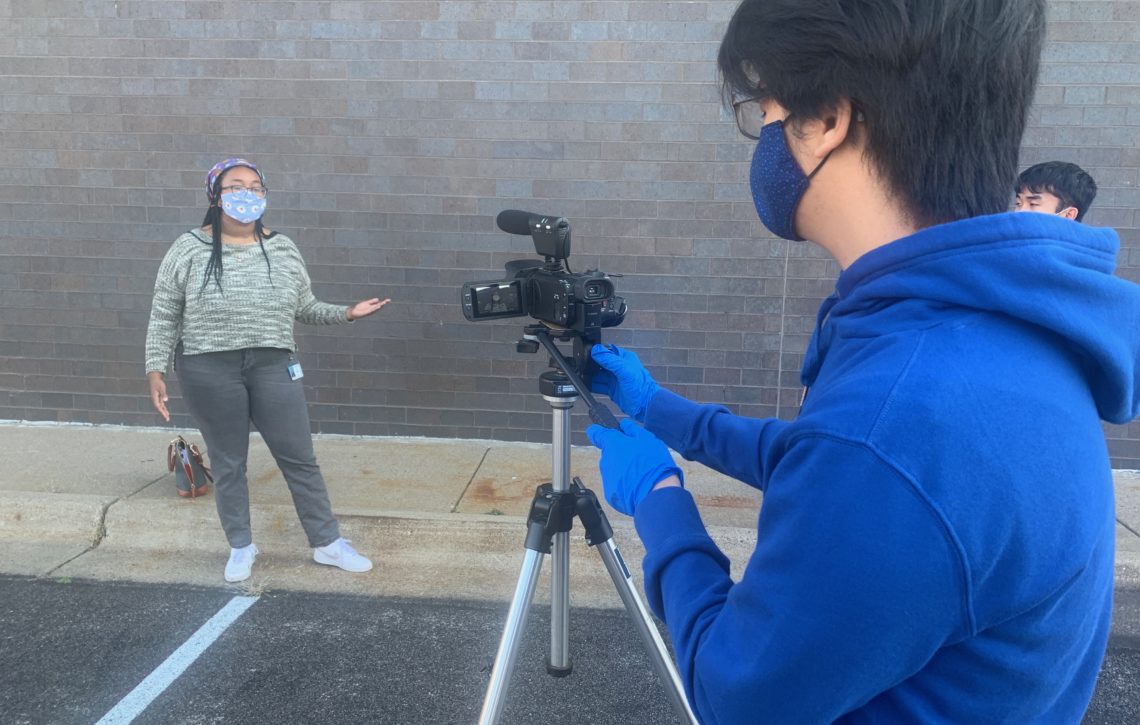 A student from Patrick Henry practices interviewing Zoë the one time she was able to meet students in person. (Photo courtesy of Zoë Jackson)

In a tumultuous year of reporting, a corps member finds solace in her service project.

So much has happened in Minnesota since Zoë Jackson joined The Star Tribune as a Report for America corps member last summer. She was meant to cover young voters and politics, and soon became a COVID-19 reporter as well. Now, her beat has expanded to covering the community reaction to the trial of Derek Chauvin.

But when we chatted the day after the verdict in the Derek Chauvin trial was announced, we discussed one thing that has surprisingly remained constant—her service project.

As part of Report for America’s national service mission, corps members volunteer their time on a local student journalism or youth media project. Zoë has been working with students taking Video 2, a class at Patrick Henry High School that produces a regular newscast.

Zoë has met the students just once, when they walked through what it’s like interviewing someone from a distance, and using the gear correctly. The students have been remote the entire school year due to the pandemic. They returned briefly earlier this month, only to switch back to remote learning because of the Chauvin trial.

“It’s mostly been jumping into Google Meets,” explains Zoë. She helps students find news from home, track down cool events via social media, and shares tips about interviewing people over Zoom and on the phone. They often run through mock interviews where they practice asking her tough questions and the 4Ws and H.

Zoe first met the students’ teacher, Alex Connover, on Twitter, through another teacher. She remembers being surprised by Alex’s willingness to let her volunteer with the students. “I was like, are you sure? I can’t even edit video that well.” Alex said that didn’t matter — it was a chance for her students, who are mostly students of color, to collaborate with a journalist of color.

“Instead of focusing on the technical work, I show them videos I have done and talk about the behind-the-scenes.” In this video, for example, she might look cool, calm and collected, but the audience doesn’t know how much time she herself spent screaming and jumping to build up her energy and enunciate correctly.

Throughout the year, as she’s worked with the students, and even on days when they don’t have their video on, Zoë has been in awe of their motivation and how they show up for their community. She learned that in May, the students were in the streets protecting small businesses during the riots. Daunte Wright, a 20-year-old Black man killed by a white police officer on April 11, was a student at Henry, too. They even had a class after the January 6 riots in D.C. and she enjoyed hearing them think aloud.

“These students are not that much younger than me. I think about what I was thinking in 2016 in high school often, and I feel that they’re so much smarter than me. Being a teenager in Minneapolis is super intense.”

For Zoë, it’s been rewarding to see her students get more comfortable on camera over time, letting their personalities shine through, and resulting in YouTube videos mixed with serious and witty tidbits. Her favorite newscast was last semester’s season finale, where students passed the baton to the new class.

Zoë is joining her newsroom full time in June so she won’t be required to do a service project anymore, but that won’t mean cutting ties with the students. “I’m really glad I found them, and I hope I can hang out with them in the new school year,” she said.