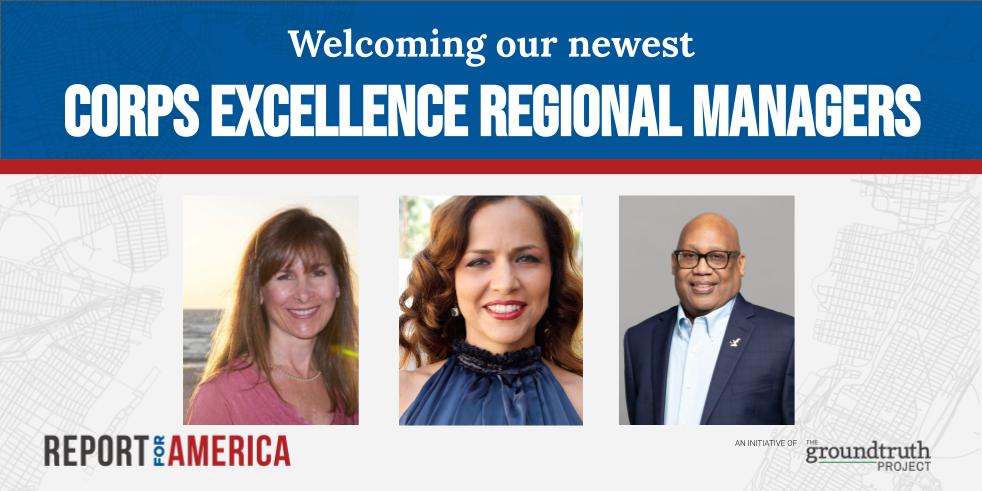 Report for America is pleased to welcome three new corps excellence regional managers to its staff: Maria Elena Fernandez, Vincent McCraw and Amy Tardif. They will support the program’s expansion into an ever-growing number of newsrooms across the nation.

These established, leading journalists will help recruit and mentor Report for America’s reporting corps members, strengthen newsroom relationships, and build partnerships with universities, journalism groups and other outlets within their regions.

“I am extremely excited to welcome Amy, Maria Elena and Vincent to our staff. They join an already impressive corps excellence team. With their deep knowledge of journalism and passion for local news, they will have a lot to offer our emerging journalists and our partner newsrooms,” said Alison Bethel McKenzie, Report for America vice president for corps excellence. “With these new staffers we add expertise in television, radio and digital media.”

Report for America, an initiative of the The GroundTruth Project, welcomes:

Amy Tardif is an award-winning journalist who is formerly the regional manager of StoryCorps in Chicago. She’s also an independent fact-checker for various podcasts, including Latino USA and Futuro Studios, Crooked Media, and other public media stations such as Michigan Radio and NPR’s Peabody Award-winning podcast Believed.

“I’m thrilled to join Report for America because it shares my values for replenishing the nation’s newsrooms, reporting on under-covered issues and communities, training reporters who reflect their audiences, and treating the profession as a successful public service,” Tardif said. “I’ve spent much of my career in public radio with an emphasis on coaching and mentoring journalists of color and uncovering truth. I’m excited to bring these experiences to Report for America to help its reporters and partner newsrooms make a difference.”

Tardif was an editor for the Public Media Journalist Association (PMJA) Editor Corps providing relief for stations during the pandemic. She served as a managing editor for NPR’s Next Generation Radio Project four times. Prior to that, she was WGCU Public Media’s station manager and news director in Florida where she also won a Peabody Award for her documentary “Lucia’s Letter” on human trafficking. She was the first woman in radio to chair the Radio, TV, Digital News Association (RTDNA), and she served five years on the Public Radio News Director’s (now PMJA) board. She’s a sought-after voice coach and former audio and video reporter and host, including for public and commercial television. Tardif is a graduate of the University of South Florida.

Vincent D. McCraw is a journalist with more than 40 years of experience in print and digital media. He has covered news stories on municipal government, politics, civic and community affairs in the Detroit, Atlanta and Washington, D.C,. media markets. McCraw is currently the Detroit chapter president of the National Association of Black Journalists.

“I’m humbled, honored and excited for the opportunity to join the Report for America team to not only be a part of helping guide the careers of emerging journalists, but also be involved in work that ensures often under-covered, undervalued and overlooked communities are covered by newsrooms around the country,” McCraw said.

McCraw started his journalism career as an intern at the Atlanta Journal in 1980 after graduating from Morehouse College. Later he was a reporter and city editor at The Atlanta Daily World, one of the nation’s oldest Black newspapers. He went on to spend 15 years at The Washington Times, where he covered the mayoral administrations of Marion Barry and Sharon Pratt Kelly. McCraw frequently reported on Congress and the White House on issues that affected the District of Columbia and became an assistant city editor. McCraw then joined the metro desk of The Detroit News as an assistant city editor directing a team of reporters covering Detroit government, politics and community affairs. In 2008, McCraw joined their digital breaking news desk as an editor-producer until 2019, when he accepted a buyout offered to eligible employees, ending a 20-year career at the newspaper.

Maria Elena Fernandez is an award-winning journalist and children’s book author who grew up in Miami and has made Los Angeles her home. An entertainment journalist for 15 years, Fernandez has covered Hollywood for New York magazine, Vulture, Los Angeles Times, The Daily Beast, and NBC.

“Wait, helping to save the profession I still love so much is an actual job that I can do? Sign me up!” Fernandez said. “I am so honored to work on behalf of restoring local journalism to communities that are starving for representation and giving the voiceless a voice. It’s inspiring to become part of a team of like-minded souls working to find solutions to problems we’ve been talking about for way too long. I can’t wait to get to know all of the corps members and newsroom leaders.”

Before moving to the West Coast, Fernandez spent many years on the crime beat at The Washington Post and the Atlanta-Journal Constitution and covered the AIDS epidemic for the Fort Lauderdale Sun-Sentinel. Her children’s book, “The Secret of Fern Island,” was published in 1996 under a pseudonym. She is currently working on a nonfiction book for Grand Central Publishing that will be released in 2023. A longtime member of the National Association of Hispanic Journalists, Fernandez is a mentor for the Latinas in Journalism Mentorship Program and has mentored at Write Girl in Los Angeles. Fernandez is a graduate of the University of Miami.