Report for America, an initiative of The GroundTruth Project, joins the Rebuild Local News coalition in its support of the U.S. Senate version of the Local Journalism Sustainability Act. The coalition represents more than 3,000 local newsrooms, funders of local journalism, and civil society organizations advocating for a healthy free press. 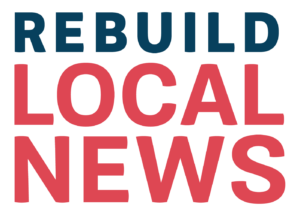 The bill — jointly introduced by the chair of the Senate Commerce Committee, Sen. Maria Cantwell (D-WA), Sen. Ron. Wyden (D-OR), the chair of the Senate Finance Committee, and Sen. Mark Kelly (D-AZ) — seeks to provide a pathway to financial viability for local news in newspapers, in digital only publications, and on television and radio stations through a series of tax credits. The legislation mirrors a similar bill introduced in the House by Reps. Ann Kirkpatrick (D-AZ) and Dan Newhouse (R-WA), which has strong bipartisan support.

“The COVID-19 pandemic made it crystal clear that local reporters and newsrooms are essential to keeping the public informed and safe, but their importance spans well beyond health emergencies,” said Sen. Cantwell. “At its core, local news is about holding the powerful accountable. The strength of our democracy is based in truth and transparency, and local newsrooms are on the ground in our communities asking the critical questions, countering misinformation, and telling our stories. We have to protect these vital parts of our communities, because once they’re gone, they’re gone.”

“Local newspapers, radio stations and TV stations are pillars of our community, bringing Arizonans trusted local news, information about community events and the latest on public health updates in their area,” said Sen. Kelly. “The pandemic made an already difficult financial situation for these news providers even harder, which is why I support the Local Journalism Sustainability Act. By providing tax credits for individuals to support local news outlets, they can continue to provide important coverage for Arizona readers, listeners and viewers.”

“The decline of local news has had devastating effects on our communities. Local news has often been the only window into the city council or mayor’s office. Without these outlets, these important institutions in our communities go uncovered. Further, the decline of local news has only fueled the growth of misinformation, as Americans lose their most trusted sources of information. As the son of a journalist, these developments trouble me greatly. Our bill would provide financial support to local news at this critical time for our democracy,” said Sen. Wyden.

The first tax credit provides a tax credit of up to $250 for consumers to either subscribe to a local newspaper or donate to a local nonprofit news organization. The second is a five-year credit for local news organizations to employ journalists. The last of the three credits is a five-year tax credit that incentivizes small businesses to advertise with local newspapers, as well as local radio and television stations. (More on the details of the bill here)

“This is a hugely important step to help strengthen communities, by addressing the collapse of local news,” said Steven Waldman, president of Report for America and chair of the Rebuild Local News Coalition. “When local news goes down, it leads to more waste, corruption, pollution, and polarization. Stronger local news leads to greater civic engagement and ability to solve local problems. This nonpartisan bill — which empowers consumers, small businesses and local publishers — will help create better local news, without endangering the editorial independence of journalists.”

The fact that Cantwell, a longtime champion of local news, introduced the bill jointly with the chair of the Senate Finance Commitee, which has jurisdiction over all tax matters, is considered a hugely important development.

The approach taken by this bill has drawn broad bipartisan support. The House version introduced last session had more than 20 Republican cosponsors.

Here’s what leaders from the coalition are saying:

“America’s Newspapers and its members from Alaska to Florida are grateful to Senators Cantwell and Kelly for introducing this legislation that will provide critical support for local news. We know that Sen. Cantwell is committed to helping local news and her recent work on facilitating newspapers participation in the PPP program was vital to its success.” America’s Newspapers CEO Dean Ridings said. “We encourage Congress to pass this legislation that will provide a bridge of support for local news as it continues its transition to a more digital ecosystem.”

“Local journalism is a bedrock of our democracy and in urgent need of support. This bipartisan legislation provides vital economic assistance to local news organizations without threatening their independence. We join thousands of local journalists and news organizations in urging that Congress act decisively to support local news.” said Jim Friedlich, executive director, The Lenfest Institute for Journalism.

“This legislation provides a much-needed boost to save local news jobs, half of which we have lost in the past decade and the losses have accelerated during the pandemic. The erosion of local news puts our democracy at threat of extinction. We enthusiastically support this plan to save local news,” said Jon Schleuss, president of The NewsGuild-CWA, the largest union of journalists and media workers in North America.

“When local news dies, the void gets filled in with disinformation” said Fanny Miller, president and CEO of El Latino San Diego. “Keeping local news strong is the first line in defense of democracy.”

“The Local Journalism Sustainability Act will help Arrandale Ventures’ thousands of local news partners — from newspapers and digital to television and radio — continue their indispensable work of informing the public, speaking truth to power, fostering common purpose in communities of all sizes, and promoting the innovative businesses that are the engine of our economy,” said Zachary Richner, managing partner of Arrandale Ventures.

“PEN America congratulates Senator Cantwell for her continued advocacy on behalf of local journalism and is pleased to see the Senate’s introduction of The Local Journalism Sustainability Act,” said Nadine Farid Johnson, PEN America’s Washington director. “Providing long-term, sustainable support to local journalism is critical in combating the collapse of local news outlets, rise of disinformation, and polarization that have become rampant in many of our nation’s communities.The bill’s combination of subscription, compensation, and advertising tax credits is a welcome step towards addressing this problem, and we hope Senator Cantwell will continue her work on this critical issue as the 117th Congress continues.”

The bill has been endorsed by the following members of this coalition:

Learn more about the coalition and its policy proposals at rebuildlocalnews.org.

Rebuild Local News is a coalition of organizations advocating for locally-grounded and nonprofit community journalism. The 3,000+ newsrooms that we represent include weekly community newspapers, citywide nonprofit websites, ethnic publications, centers for state watchdog journalism, digital-first news sites, rural papers, public radio stations, and family-owned newspapers as well as the leading organizations advancing local journalism innovation. The coalition is housed at The GroundTruth Project, a nonprofit dedicated to restoring journalism from the ground up by supporting the next generation of journalists through field reporting that serves under-covered corners of the United States and the world.