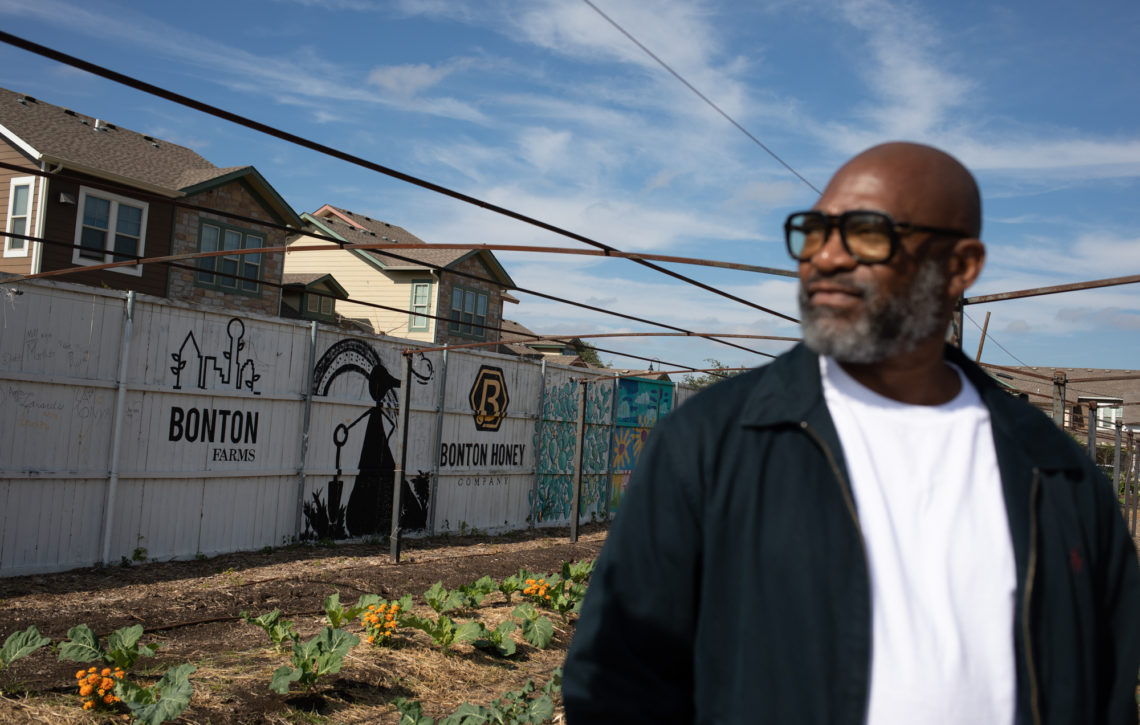 Lee says Bonton Farms saved his life. Not only did they get him off the streets, offered him a job, and gave him a place to live, but they’re also helping him receive a kidney transplant. “I immediately started thinking about all of the people that I knew in my community that qualified and who died waiting for these services,” Lee said after learning about the medical resources he’s now taking advantage of. (Photo by Keren Carrión/GroundTruth)

Four Black-owned media companies—New York Amsterdam News, The St. Louis American, Black Voice News and the Atlanta Voice, in collaboration with Report for America—have joined together to produce “The Barren Mile: COVID-19 and the fight against food apartheid,” the first collaborative national enterprise story by multiple Black publications since the 1960s.

“The Barren Mile,” which is being published nationally as well as in the four weekly newspapers today, examines the toll that COVID-19 pandemic has taken on Black communities already struggling with food insecurity and where systemic, social inequalities have left many living under what activists call “food apartheid.”

“Very few publications can tell the stories of the Black community like Black-owned publications, which have been pillars of our communities for more than a century,” said Alison Bethel, Report for America’s vice president of Corps Excellence and lead on the program’s Black Press Initiative. “We are very grateful that the publishers of these papers had the foresight to embark on this special and unprecedented collaboration.”

Published just ahead of Thanksgiving, the project highlights sobering facts. According to Feeding America, the nation’s largest charitable hunger-relief organization, one in four Black Americans experienced food insecurity in 2020—three times the rate for white households. The U.S. Department of Agriculture has said the rate of food insecurity in Black households last year was more than double the national rate.

The reporters and photographers, based in Atlanta, central California, New York and St. Louis, worked on the series of stories for five months. Each of the Black-owned publications will run the stories in their respective print editions and on their websites.

In a co-publishing deal, Mother Jones magazine will also publish the lead story on its website.

“It is truly a privilege for Black Voice News to be part of this historic effort by members of the Black media to raise our voices simultaneously and in solidarity to heighten awareness regarding one of the most important issues impacting many in our communities across the country—ready access to fresh food,” said Stephanie E. Williams, executive editor of Black Voice News and an editor on the project.

“It is through collective efforts such as this that the seeds of change are planted. This type of collaboration not only serves to magnify the impacts of issues like food apartheid, it also adds Black voices from across the country to a single conversation around this issue. I hope this is just the beginning of the Black press working together to tell such important stories in unity. A special “thank you” to The GroundTruth Project and Report for America initiative for creating the space that made this type of collaboration possible,” Williams added.

New York Amsterdam News, The St. Louis American, Black Voice News and the Atlanta Voice are Report for America host newsrooms along with 11 other Black-owned publications. Report for America is currently fielding some 300 journalists in more than 200 newsrooms across the country to report on under-covered communities and issues.

Report for America is an initiative of The GroundTruth Project. Readers are invited to view the series online here.