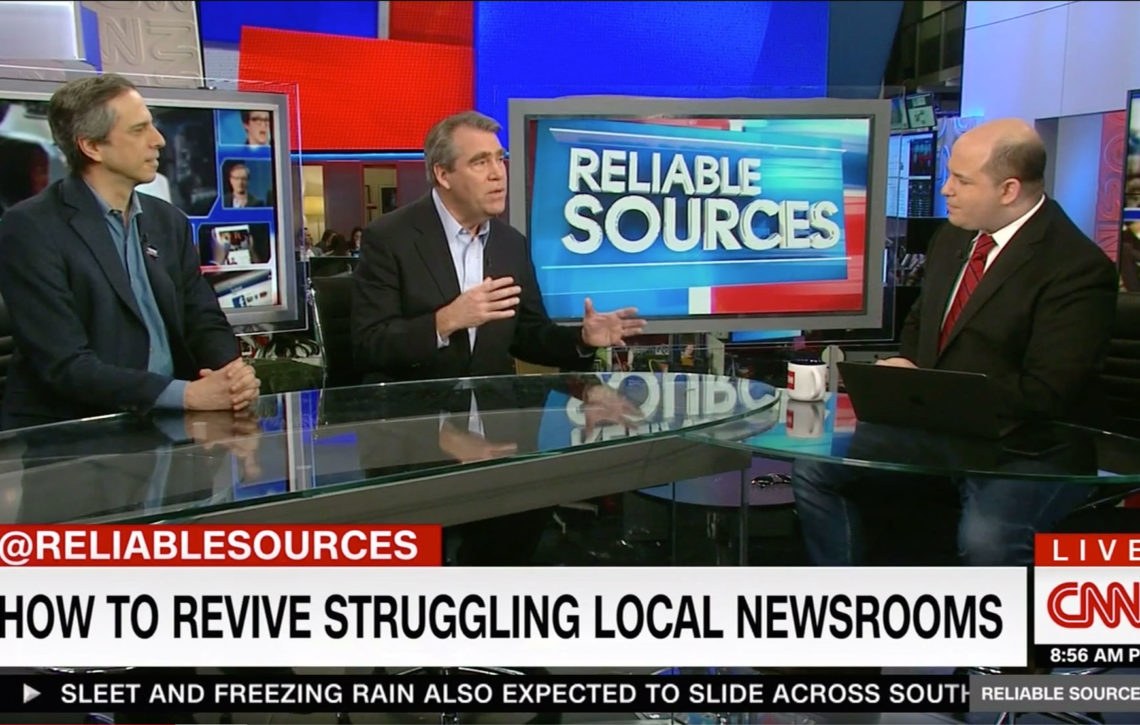 Steve Waldman (left,) and Charles Sennott (center) discussed with “Reliable Sources” host Brian Stelter the expansion of Report for America and its importance for local communities.

The GroundTruth Project today announced that it will launch a national search for the role of CEO-and-President at the nonprofit journalism organization, which is home to Report for America and Report for the World. GroundTruth’s board of directors has assembled a search committee and looks to welcome its new leader by early 2023.

Charles M. Sennott, veteran journalist and founder of The GroundTruth Project, will step out of his current position as CEO to focus on his role as Editor-in-Chief, effective Sept. 15. A board-led transition committee will guide the executive leadership through a two-phase plan.

As part of the second phase, after the CEO and President has been selected, Steven Waldman will step aside from his position as President of Report for America to transition fully to the advancement of public policy through his role as Chairman of the Rebuild Local News Coalition, which he founded two years ago.

“The time is right,” said Sennott, who after a long career as a local reporter and international correspondent launched GroundTruth nearly ten years ago and has presided over 1,000 percent growth of the nonprofit organization.

“We are making this bold move because we know we have built the right team for this moment and creating room for new leaders at the top will be the best way to write the next chapter of this ambitious organization’s work,” Sennott added. “It’s important to note that Steve and I are not leaving the organization, but leaning into the roles where we can add the most value not just for the organization but also for the larger journalism landscape. And for me, being back in the field is where I belong.”

“I’m looking forward to focusing on the enormous need and opportunities in public policy which gains momentum every day,” said Waldman. “And in the meantime, I am honored to work with this whole team to continue the growth during the interim.”

An award-winning journalist over the last 40 years, Sennott will oversee GroundTruth’s independent editorial initiatives, relaunch its podcast, and develop reporting projects and editorial partnerships that align with the organization’s mission. Sennott will also redouble his efforts in fundraising, which have to date raised more than $50 million over the last decade. He and Waldman plan to remain active on the board of directors.

The GroundTruth Project has grown tenfold since its founding—from a $1.2 million budget and a handful of employees in its first year to a $13 million annual budget, and a staff of nearly 50 today.

Much of GroundTruth’s growth has been through the 2017 launch of Report for America, which was co-founded by Waldman and Sennott. The innovative national service program currently fields some 300 journalists in local newsrooms across the United States. Emulating that service program globally, GroundTruth last year launched Report for the World, which has newsrooms in Nigeria, India and Brazil, and has just announced a new round of applications.

“The global crisis in local news continues to grow and it is imperative that The GroundTruth Project scales and adapts to meet it head-on,” said Joanne Heyman, GroundTruth Board Chair. “We applaud Charlie and Steve for meeting this moment by making room for new leadership to build on our successes. This bold stroke will not only enable the organization to enact its vision for growth, but it will also allow them to further strengthen our efforts in these new roles.”

Report for the World will soon announce the hiring of its first global director. GroundTruth Project co-founder Kevin Grant will oversee Report for the World and provide continued leadership and continuity for the organization in his role as Chief Partnerships Officer.

Report for America will continue to be led by Kim Kleman, Senior Vice President, who has overseen the scaling of the program since 2019.

Susan Leath, GroundTruth’s Chief Operating Officer, who will continue to play a crucial role in guiding the organization, said, “We strive to be the North Star of organizations supporting local journalism worldwide. And through the vision of our founders and the mission-driven team we’ve built, we are well-positioned to enter this next chapter.”

About The GroundTruth Project

The GroundTruth Project is an award-winning nonprofit journalism organization dedicated to rebuilding journalism from the ground up. GroundTruth serves under-covered communities by supporting the next generation of journalists to do on-the-ground reporting and to advance sustainability, innovation and equity in journalism worldwide. GroundTruth’s flagship programs — Report for America and Report for the World — place talented, diverse local reporters in the newsrooms that need them most.