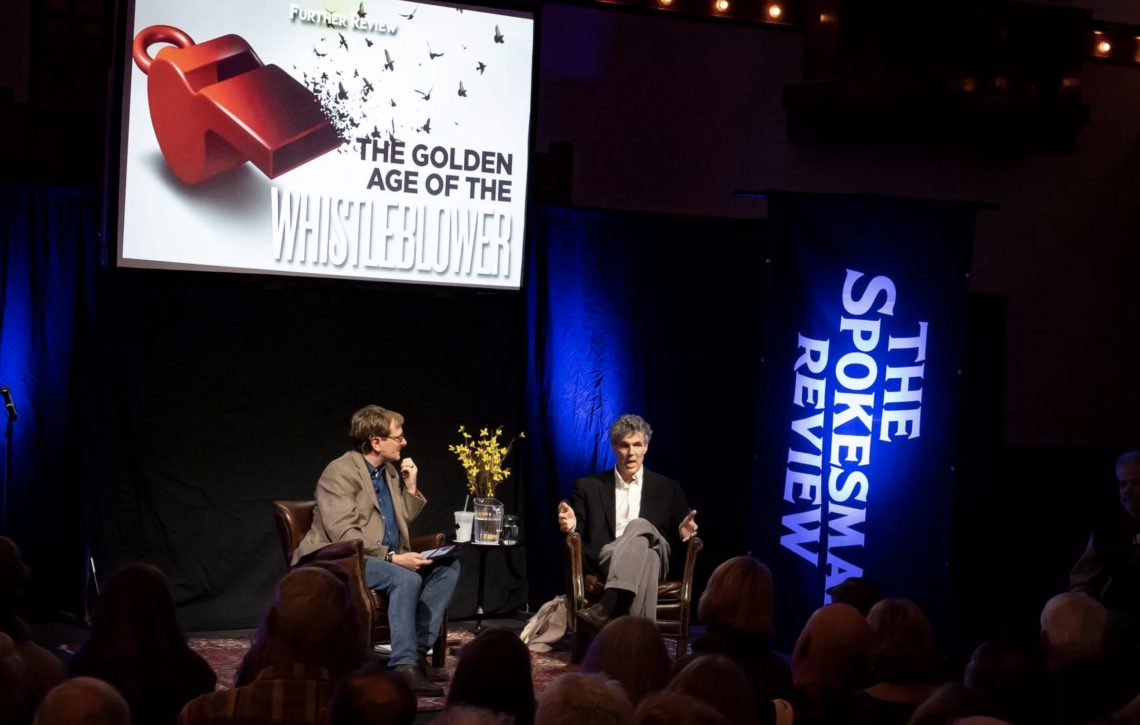 Spokesman-Review Editor Rob Curley has a conversation with Tom Mueller, author of “Crisis of Conscience: Whistleblowing in an Age of Fraud,” during a Northwest Passages event held at the Montvale Event Center. (COLIN MULVANY/THE SPOKESMAN-REVIEW)

In the last five years, The Spokesman-Review fundraised over $1 million with support from local and national donors, and its Report for America partnership helped ignite the success.

Based in Spokane, Washington, The Spokesman-Review has experienced consistent growth as a result of the different sources of philanthropy that now make up more than 25% of its payroll budget. It has been a Report for America partner newsroom since 2019.

As he focused on fundraising efforts in late 2017, Rob Curley, executive editor at The Spokesman-Review, felt the best way to start fundraising was by establishing the newsroom’s critical role within the community.

“A big part of our strategy is what we call the “virtuous circle.” We wanted the newsroom to bring the community together in a way that other organizations couldn’t. We wanted to be at the center of the region’s dialogue,” Curley explained.

To start this type of community dialogue, the newsroom kicked off an event series, Northwest Passages, which brings together anywhere from 200 to 700-plus subscribers and community members to discuss books, movies, sports, politics, cooking, journalism, environmental issues, homelessness, school safety and more.

Along with creating the space for the community to learn and have open discussions, Curley utilizes the events to emphasize that all donors, subscribers and event attendees have a direct impact on the work that The Spokesman-Review can produce and, thus, the information available to the community.

The events (which take place, on average, 1-3 times a month) became a catalyst for local support and even resulted in one of the biggest individual donations after the first-ever event.

“Instead of charging $25 a ticket or something like that, what we wanted and needed was for somebody at one of our early events to be so moved that we were working so hard to be the epicenter of our community’s most-important discussions that they would write us a check for $25,000. And, that night, we got our first $25,000 check,” Curley said of the very first Northwest Passages event in December 2017.

The Spokesman-Review joined the Report for America program in 2019 feeling confident they would be able to fundraise half of their first corps member’s salary.

“We are so proud to get to work with Report for America. Our relationship with RFA has been a true catalyst in helping us raise money. It gave us credibility,” Curley shared.

Within a week of the 2019 announcement that The Spokesman-Review would be welcoming a Report for America corps member to report on rural health, the newsroom had raised its share of the reporter’s salary.

Continuing to build on their events series as a way to engage the community and spotlight their reporters’ work, the newsroom raised $130,000 in 2019 and $250,000 in 2020 from individual donors and larger grants from a Washington utility company and the Innovia Foundation (which continues to give the newsroom annual $20,000 grants).

Another key gift in 2021 came from the creation of an endowment from an individual that yields approximately $50,000 annually to fund the newspaper’s new racial and social equity reporter position. This brought Spokane newspaper’s 2021 fundraising total to $300,000.

As of May 2022, The Spokesman-Review has already secured around $400,000 in fundraising for this budget year.

“We currently have the equivalent of eight FTE newsroom positions funded by philanthropy, sponsorships, corporate support and donations from readers,” Curley added.

A key element, Curley said, in getting these local donations is that all of the journalism funded in this manner must be made available to the public for free, and carries a Creative Commons license instead of the newspaper’s traditional copyright.

In the journalism philanthropy space, this level of fundraising is nothing short of crucial. The Spokesman-Review is proving that local newsrooms that support and are supported by their community can gain the momentum necessary for financial sustainability through philanthropy.