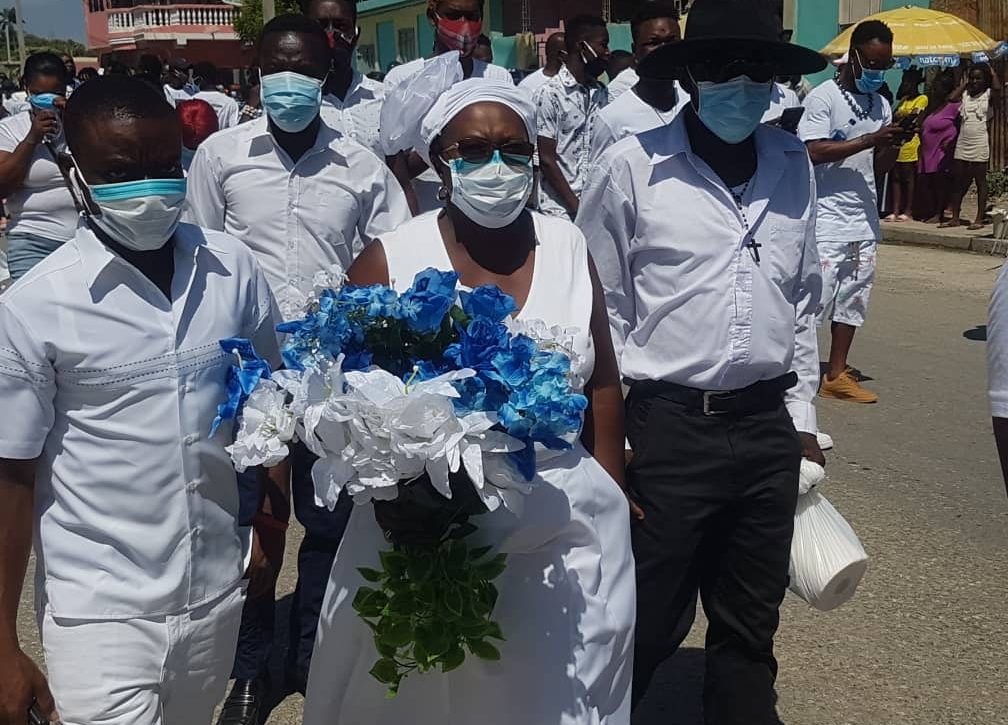 A woman holding flowers walking alongside men during a procession for President Jovenel Moise in Port-de-Paix on July 16, 2021. Photo by Steeve St. Fleur for The Haitian Times.

Report for America host newsroom The Haitian Times has tenaciously covered the assassination of Haitian President Jovenel Moise over the past few weeks, fearlessly employing corps members to chase the intricacies of a story that has great impact on the Haitian diaspora. Moise was killed and his wife, Martine, was seriously injured in an attack on their Port-au-Prince home, July 7.

Moise is the first head of state to be assassinated in the Western Hemisphere since the assassination of U.S. President John F. Kennedy in 1963. His funeral will be held July 23 in the city of Cap-Haitien. Martine underwent surgery in Miami and has since returned to Haiti.

As the investigation into Moise’s killing continues, the U.N. says nearly 15,000 people have been forced from their homes in Port-au-Prince over the last six weeks. President Moise’s critics say he, through indifference as well as malice, allowed gangs to take over the most destitute areas of the capital.

The story extends well-beyond Haiti. Report for America corps members Sam Bojarski and Onz Chéry have been doggedly covering the story in New York and in South Florida, where three Haitian Americans were among those arrested in the killing.

Bojarski covers the Haitian community and its diaspora in Brooklyn. Chéry covers Little Haiti in Miami. Together with their editor Macollvie Neel, they have reported more than two dozen stories on the assassination—it’s impact there and in the United States.

“Without Report for America we could never have reached the heights that we have climbed. I know our reporting on this would have been smart and insightful,” said Garry Pierre-Pierre, founder and publisher of The Haitian Times. “But Report for America has shown what media outlets can achieve with the proper support. This is what Report for America’s founders envisioned and should serve as a clarion call to everyone why an independent journalism ecosystem undergirds democracy.”

The Haitian Times was founded in 1999 by Pulitzer Prize-winning journalist Pierre-Pierre as a weekly English-language newspaper based in Brooklyn. It is one of the oldest news outlets in the Haitian Diaspora. The paper’s aim is “to share the stories of Haiti and of Haitians across the diaspora, shed light on issues that impact Haitian enclaves and highlight the achievements and challenges of our community.”

The Haitian Times, currently an online only publication, is one of 15 Black-owned publications that have partnered this year with Report for America to cover communities of color throughout the United States.

These are among the stories published by Report for America’s corps members:

“Our father died,” some in Haiti’s northwest say about Moïse’s killing – Onz Chéry