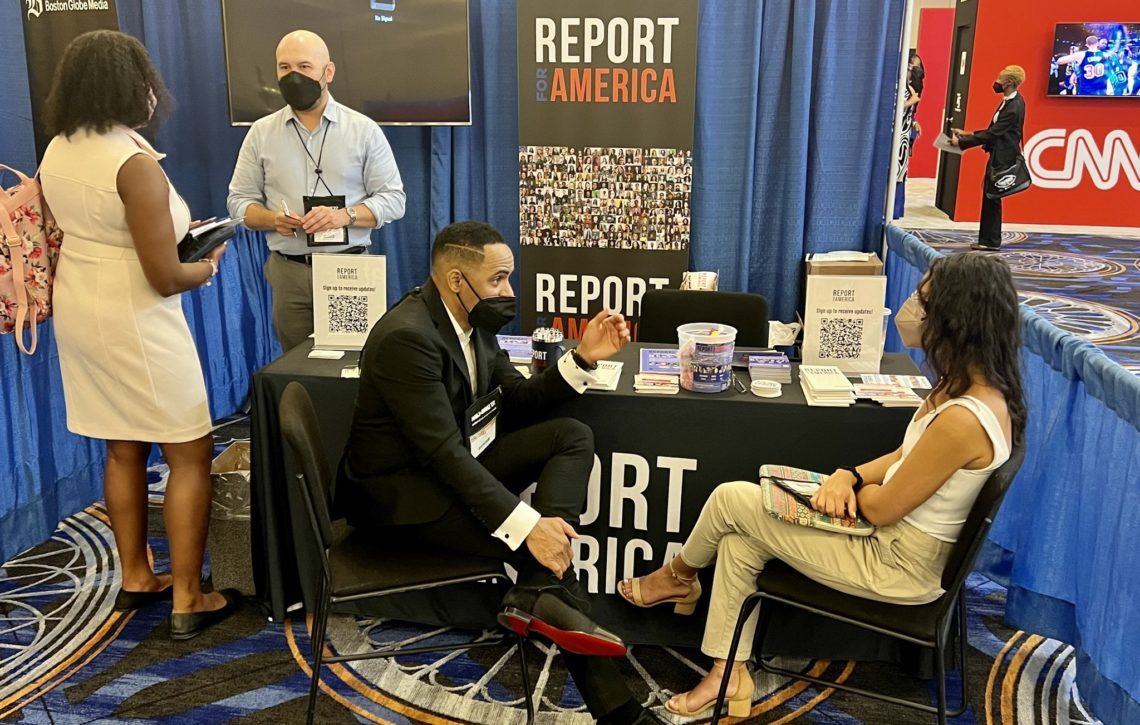 The Report for America team speaking with prospective candidates at the 2022 NABJ/NAHJ conference in Las Vegas.

Journalism might not be the first profession Americans think of when hearing the phrase national public service. Images of the military, disaster workers, or even the Peace Corps are more likely to be evoked.

But in 2017, veteran journalists Charles Sennott and Steven Waldman challenged the nation to think much more broadly, not only to consider the role journalism plays in safeguarding democracy but how vital it is for communities to remain informed about their schools, infrastructure, health, and civic wellbeing.

They offered a new model for how service-minded journalists could be pulled together as a reporting corps and help bring back the local journalism that’s been lost in the nation’s rapidly shrinking newsrooms. And at the Google News Lab Summit, on Sept. 18, 2017, they issued a nationwide call to action—giving birth to Report for America, a national service program that places talented journalists, called corps members, into local newsrooms to report on under-covered issues and communities.

“The crisis in local news offered a wake-up call for us,” Sennott said. “But more importantly, it offered an opportunity for us at The GroundTruth Project to meet the moment head-on by harnessing the energy of the next generation of journalists.”

Launched as an initiative of The GroundTruth Project, the nascent program began modestly with three corps members, Molly Born, Caity Coyne and Will Wright. They were placed with local newsrooms in Appalachia at the beginning of 2018. Beyond bringing coverage back to communities like Pikeville, Kentucky, where Wright was the first Lexington Herald-Leader reporter there since 2011, the journalists worked together to explore how many residents of Central Appalachia lacked access to clean water. 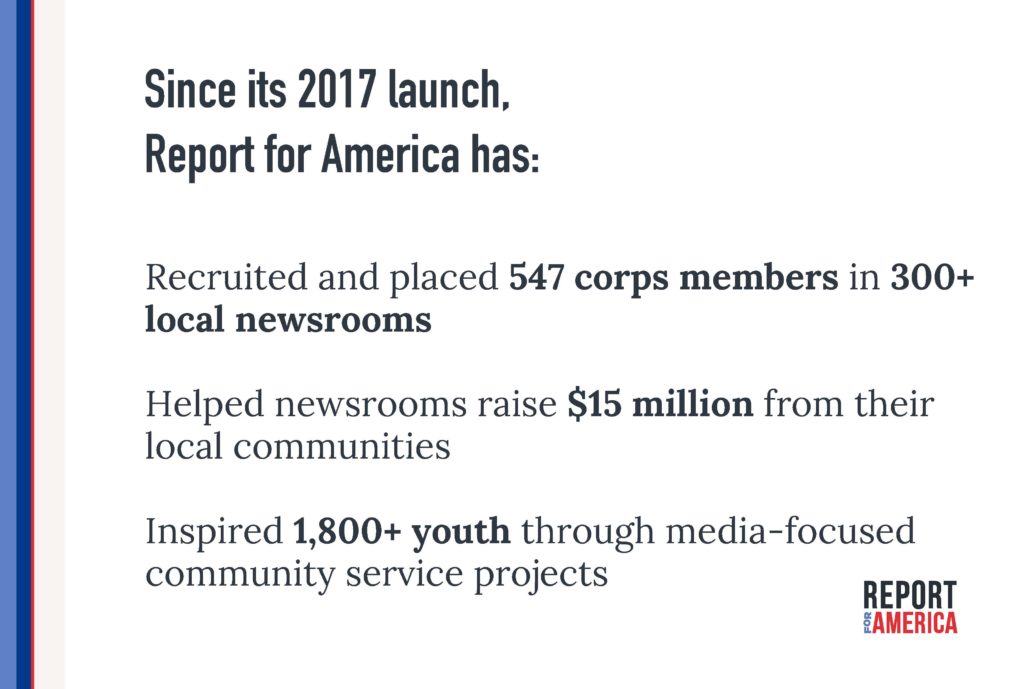 By year’s end, Report for America’s reporting corps expanded to 13 with journalists and photographers placed in Illinois, Mississippi, Tennessee, and Texas. Five years later, 547 journalists have served in 300-plus newsrooms, in all 50 states, Puerto Rico and Guam. Nearly half of the corps are journalists of color and two-thirds are women. They have filed tens of thousands of stories and have won numerous awards.

Born, Coyne and Wright’s “Stirring the Waters” series garnered them praise as 2019 Livingston Award finalists, but more importantly, it also led to state funding to make repairs. More recently, Syra Ortiz-Blanes was part of the Miami Herald team that won the 2022 Pulitzer Prize for its coverage of the collapse of the Champlain Towers South condominium complex, “merging clear and compassionate writing with comprehensive news and accountability reporting.”

“It has been incredibly rewarding to see firsthand the way local journalism can empower communities and hold the powerful accountable,” said Kassidy Arena upon the completion of her two-year stint as a corps member, covering Spanish-speaking and immigrant communities for Iowa Public Radio. “Report for America is integral to bringing the freedoms and privileges of democracy to underrepresented people. It has been an honor to make a contribution to this organization and the country.”

And while reporting is at the heart of the program, Report for America also looks to reshape the industry’s business model to make local journalism more sustainable. “A new national service program focused on local reporting would more efficiently deploy philanthropic resources to the media enterprises that need it most, while instilling a new sense of idealism into community-based coverage,” Waldman wrote.

It does this through a shared salary structure in which Report for America pays up to half of the corps members’ salary while asking the newsrooms to fundraise their share in the local community. While this is a new concept for many newsrooms that have traditionally relied on advertising and subscriptions for revenue, many are succeeding by embracing the community news funds approach. Since 2019, over $15 million has been raised by newsrooms Report for America’s support.

“It has been a game changer,” said Dr. Paulette Brown-Hinds, publisher of Black Voice News, of partnering with Report for America. “The quality of reporter that we’re able to afford, we couldn’t afford before. It’s been such a boost to our newsroom.”

Another key element of the program is its requirement for corps members to volunteer in their communities. Most lean into working with high schoolers on media-related service projects that promote media literacy and inspire the next generation of journalists. To date, more than 1,800 youth have been reached by the projects. Recently, KUNR’s Youth Media Program, mentored by Report for America alumna Lucia Starbuck, won a national Edward R. Murrow award for excellence in diversity, equity, and inclusion.

Since its inception, Report for America has steadily gained widespread recognition within the media industry, on college campuses, and in the philanthropic community. Nearly 2,000 prospective corps members apply each year.

Despite these successes, Report for America doesn’t plan to rest on its laurels.

“Far too many Americans desperately need reliable, fact-based information to make decisions about their daily lives, and a growing number of local newsrooms are turning to us for support,” said Kim Kleman, Report for America’s senior vice president who leads the daily operations of the program. “We’re extremely proud of our ability to attract diverse, talented journalists who want to be that difference—yet ultimately, it will take the combined efforts of newsrooms, journalists, philanthropists, and the communities we’re needed in, to rally around this continued call to serve.”