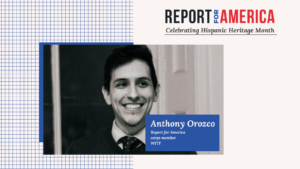 Hispanic and Latino journalists are historically underrepresented in newsrooms, with estimates that they make up around 11% of staff. Report for America seeks to change these statistics. We currently partner with five Latino-owned newsrooms. Roughly 21% of our corps members identify as Hispanic or Latino, and many of them cover beats specific to Latino communities. This Hispanic Heritage Month, we spoke with a few of these corps members to understand what drives them, and why their heritage is an important part of their coverage.

Anthony Orozco is a Report for America corps member covering Latino communities for WITF, a public radio station in Harrisburg, Pennsylvania. For Orozco, being a Latino journalist comes with a great deal of responsibility. He strives to be a mindful, ethical and respectful reporter, one who has to carefully navigate the transition between issues, cultures and languages.

“Covering Latino communities means I need to earn the trust of the people whose stories I’m telling,” he says. “It also means telling stories that need to be told but often go unheard.”

“I am most proud of the stories that amplify the voices of everyday people. I love highlighting the courage, tenacity and ingenuity of underdogs who refuse to be stopped in the pursuit of their dreams.”

This summer, Orozco spoke to some of Pennsylvania’s Latino residents, capturing what their top electoral concerns were: among them, cost of living, community safety, and community benefits like playgrounds. Read more of Orozco’s reporting below:

Orozco reports on both regional and national issues, but ultimately, his hope is that the stories he writes empower local readers to influence the world around them.