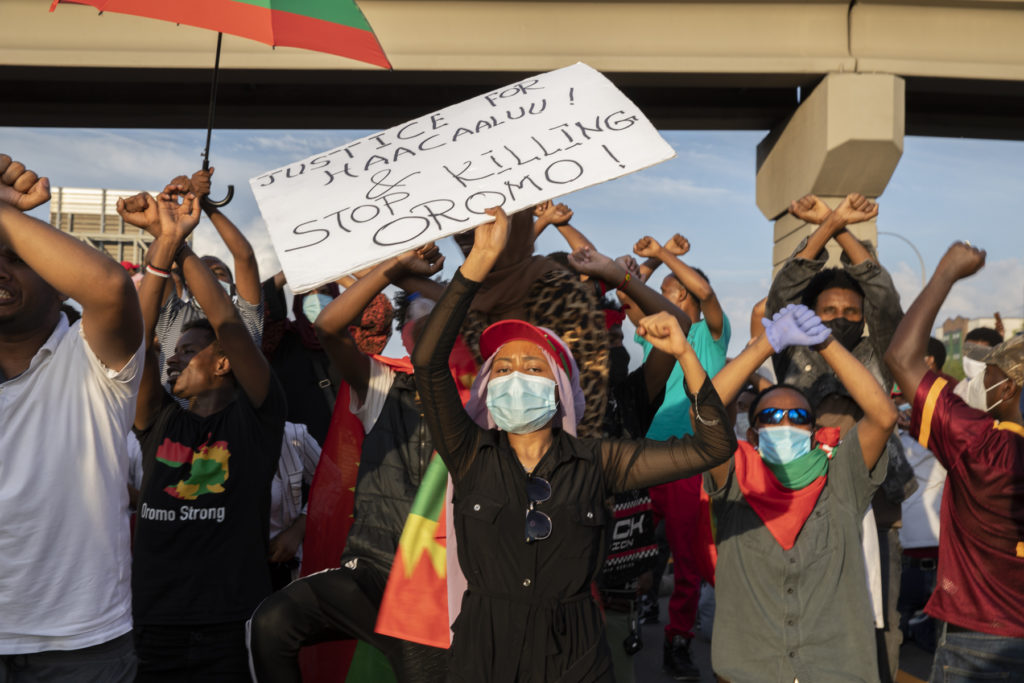 They protested against the killing of prominent singer and activist Hachalu Hundessa who was shot and killed in Ethiopia’s capital Addis Ababa on June 29, 2020. (Photo by Jaida Grey Eagle/Sahan Journal)

“The Black press is really important for Report for America and communities at large because they have such a rich history of telling stories of communities and people that have been disenfranchised, and whose stories have not been told in mainstream media,” said Alison Bethel McKenzie, vice president of corps excellence at Report for America, in a recent interview.

That history continues to be written to this day. And in the spirit of Black History Month we are celebrating various aspects of the extraordinary contributions of the Black press, drawing on its legacy of representative reporting, investigation and accountability in the public interest to tell the stories of Americans today.

The Bay State Banner, founded in Boston in 1965 to serve the city’s African American community, is New England’s longest-running Black-owned newspaper. In that time, it has covered social movements, political transitions and policy, education and the arts “through the lens of communities of color.” Report for America corps member Morgan Mullings joined the august publication on the hill, covering the legislature, City Hall and municipal affairs to report on how public policy affects the state’s minority populations. Her incisive reporting empowers the Banner’s readers with reliable information on what’s impacting their daily lives, from education and public health to equity in policy making, such as in this article about local leaders discussing the outsized impact—and blame—placed on Black and brown communities during the pandemic. Explore the Banner’s Black History archive here.

In Kansas, the biweekly statewide Community Voice has continuously expanded since its 1993 founding, serving under-covered areas from Wichita to Kansas City by reporting on the issues most impacting residents’ lives, such as affordable housing and the reduction of violent crime. Our reporter on the ground, Jazzlyn Johnson, is filling a crucial coverage gap in social justice reporting on African American communities there. Her Report for America colleagues Kaitlin Washburn and Humera Lodhi, a gun violence reporting team at the Kansas City Star, are meanwhile documenting the efforts of Black lawmakers from Kansas’ hardest-hit districts, and the overwhelming opposition they encountered from the majority white, rural legislature.

A more recent contender in the field, MLK50: Justice Through Journalism is a nonprofit digital newsroom launched in 2017 that focuses on the intersection of poverty, power and policy from the perspective of Dr. Martin Luther King Jr.’s probable allies. With its bold model, MLK50 developed Black Lives Matter, Environmental Justice and Economic Justice verticals, and through its reporting uncovered a medical death trap affecting thousands in Memphis and investigated dangerous working conditions at a warehouse amid COVID-19. Report for America corps member Carrington Tatum has recently been documenting the progress of an oil pipeline threatening to displace predominantly Black residents from South Memphis.

Without these newsrooms and others that follow in the great tradition of democratic representation through information, not only would these communities be facing a vacuum of critical accountability but the nation at large would be ignorant of its own history, with no recourse for examination, improvement, fulfillment. The survival of these institutions is the survival—and betterment—of the Union.

Learn more about these publishers in this interactive story map: