NEW YORK—After a highly competitive search, Report for America has announced the selection and placement of its 2019 class: 60 reporters in 50 local news organizations across 28 states and Puerto Rico.

Check out the corps!

Report for America is a national service program that places talented emerging journalists into local news organizations to report for one to two years on under-covered issues and communities. An initiative of The GroundTruth Project, Report for America addresses an urgent need in American journalism at a time when local news deserts threaten our democracy like never before.

The reporters, referred to as “corps members,” were chosen after a highly selective national competition that drew nearly 1,000 applications. Some 70 leading journalists, editors and teachers acted as judges.

The 2019 corps, which begins reporting in June, includes 50 newly selected journalists and 11 current Report for America corps members who will continue their service for a second year.

The new corps members have won numerous awards, including North Dakota Newspaper Association Rookie Reporter of the Year, the Emma Bowen Award for Courage Reporting, the Green Eyeshade Award and the Felker Award for Excellence in Long Form Journalism.

They have a range of experience at local newspapers such as the Grand Forks Herald, Las Vegas Sun Reporter and the Toledo Blade; radio stations like Wisconsin Public Radio and WBUR; and national news outlets including the Associated Press, National Public Radio, Reuters and Fox News.

In addition, the corps includes several remarkable journalists who have had extraordinary non-journalistic careers—two Olympic athletes, a pediatrician and a geography professor.

“The quality of the applicant pool was mind-boggling, and their spirit—the commitment to local journalism as public service—was genuinely inspiring,” said Steven Waldman, Co-Founder and President of Report for America.

Through their reporting, corps members will tackle some of the most important issues facing Americans today. Eight will cover health, including a pediatrician who will report on child health in Modesto, California. Seven will cover Native American issues. Others will focus on agriculture, the environment, criminal justice, and local government. Several corps members will work in Spanish-language media outlets, covering, for example, ongoing hurricane recovery in Puerto Rico. This year, Report for America will also expand its state and regional corps: Eight corps members will work in California, eight are headed to newsrooms in the Mountain West and we are expanding our corps in Appalachia by two.

Earlier this year, Report for America announced a major expansion, quadrupling its placement of reporters from 13 in 2018, to at least 61 in 2019. The expansion of the corps was made possible by philanthropic leaders including the John S. and James L. Knight Foundation, the Facebook Journalism Project, Google News Initiative, the Ford Foundation, Natasha and Dirk Ziff, the David and Lucile Packard Foundation, Craig Newmark Philanthropies, the Heising-Simons Foundation, the Galloway Family Foundation, the Tow Foundation, LOR Foundation and many more.

“Ensuring that every community has access to great local news is vital to restoring trust in media and our democracy. That’s why expanding the pool of excellent journalists who are passionate about local news is so important,” said Jennifer Preston, Knight Foundation Vice President for Journalism.

“I’ve had the opportunity to tell stories that, for years, had been overlooked,” said Samantha Max, a second-year corps member. “Communities need journalists to hold leaders accountable and provide platforms to ordinary citizens whose voices are often ignored.”

Report for America leverages a unique funding match model, paying half of a corps member’s salary, while encouraging and supporting its local news partners to contribute one-quarter and local and regional funders to contribute the final quarter.

“Bringing on Report for America reporters enables KUER to open bureaus in southern Utah, so we jumped at the chance,” said Andrew Becker, News Director for KUER/NPR Utah in Salt Lake City. “We have reported on that half of our state for years, but to have a steady presence there, to be part of the community on a daily basis and to report regularly on issues that concern people across Utah will be a huge win for our newsroom, our station and our listeners.”

Corps members will attend Report for America’s intensive training in Houston, TX in June, followed by the Investigative Reporters and Editors Conference before joining their newsrooms to launch their first year of service. 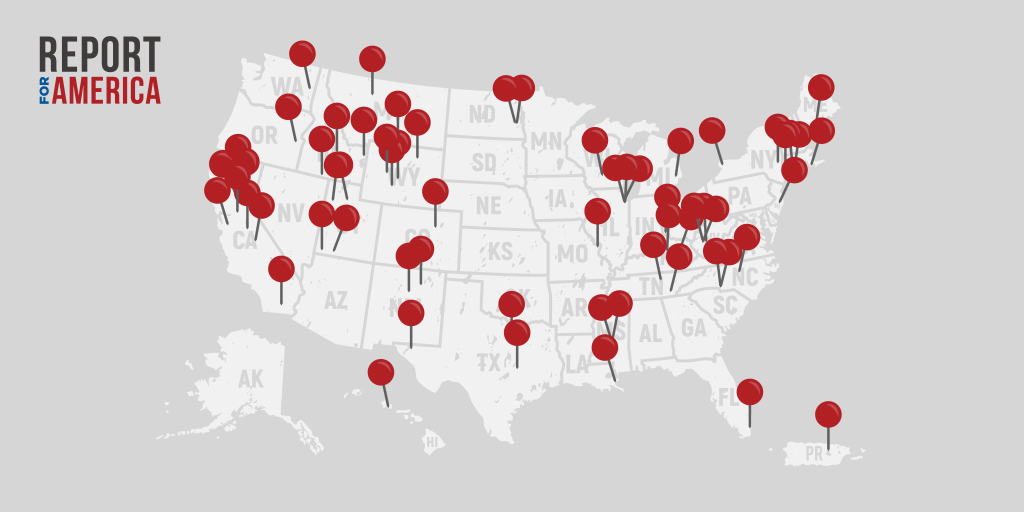